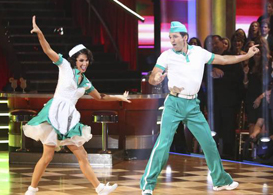 Thanks alot to the campaign trail to breaking this dance show into two nights! That’s sarcasm, if you couldn’t tell. But I would also like to thank America for actually voting last week and turning this into a talent competition. Let’s continue that spirit and getting out to vote in November, too. Now, I’ll gracefully step off the soapbox, draw the shade, and get back to business.

The stars were given the chance to dance to their favorite guilty pleasure songs. Kelly was up first with a samba. It must be jelly ‘cuz jam don’t shake like that! She did a different take on the samba, which was a bit on the raunchy side, but worked with the music. 24.5

Gilles is using what he knows is effective to keep him at the top of the leader board: sex appeal. He’s already locked in the middle aged woman and gay men vote with those dimples. Now he’s going for the gusto by flexing his muscles being able to toss his partner around like a rag doll. Carrie Ann got so flustered by his “come hither” hips that she fell off her chair! His rumba gave a 1, 2 punch to score him a 29.5.

Is it just me, or did Kirstie look her best tonight all around? Her quick step was effortless and she looked beautiful. Go Kirstie! 25.5

Emmit Smith makes me smile every time he performs. His samba, in my opinion, was the best of the night! His timing was perfect. His steps were syncopated to the rhythm of the music. I’m not saying I was trying too look on purpose, but when your hips move like Emmit’s you can’t help but wave hello to Junior. His wife is always smiling, for good reason! 29

We were introduced to the first group dance of the season. Apolo, Melissa, Shawn, and Sabrina consisted of team “Call Me Maybe.” I can’t with that name…It was the first time a team was able to do a freestyle compilation. Although, for the most part it was well composed, I never want to see a man cha cha in a football uniform again. It looks ridiculous!

I’ve held my tongue long enough about Brooke Burke. I am bursting on the inside. First, that dress looked like the Cat in The Hat strolling down Santa Monica Boulevard on Halloween! And who does she think she is with that bedazzled microphone? Unless your name is Barbra or Oprah, take yourself to Sam Ash and hit the clearance section.

Part two of guilty pleasures is Tuesday night. We will be given the second group dance to the tune of (wait for it) GANGHAM STYLE! Let the hot mess begin!