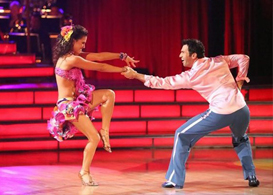 Since there wasn’t a single professional sporting event on (travesty), and RuPaul’s drag race All-star edition premiered on Monday, I was able to give Tuesday night’s show my undivided attention. Let the eye rolling begin!

Melissa kicked the night off with a tango to Britney Spears’ “Toxic.” She looked like she had toxic shock syndrome through the first half. She was so stiff like she had inserted her Tampax improperly. By the second half of the number, she must have wiggled it loose because it was much, much better. 27

Shawn Johnson was worried about performing a rumba because it’s a softer, more feminine dance, which she was afraid she couldn’t pull off since the first thing they do to young gymnasts is insert a Y chromosome before puberty (hence the broad shoulders). She looked, dare I say it, SEXY! She looked like a sophisticated, won’t get in your bed for less than ten grand, sensual call girl. The judges were too critical on her technique, which put their scores all over the place. She still garnered a 27.

Apolo’s samba, in my opinion, was a little to fast which made it look messy. I am really indifferent about his performance because it was still good, but just not great. I think it’s tough for anyone to follow such a powerhouse like Shawn and not appear lack luster, unless they do something over the top spectacular. 27

Sabrina’s waltz was simply divine. She appeared as if she was floating on air. Highest score of the night. 29

Team Gangham Style was just as a predicted; a HOT ASS MESS! They better be glad there is no elimination this week!