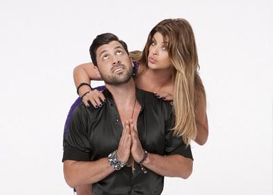 I feel like we’re all friends here and on a first name basis so… OK, enough with the phony smile. I’m seething off that horrible Cowboys game, so I wasn’t in the mood to sit through anymore garbage! I mean, FIVE interceptions Tony Romo! Emmitt Smith should have been excused from the competition and coaxed out of retirement to salvage the game! I know you didn’t come here to read about football, and half of my audience has no idea what the redzone is (Hey, Scotty), so I’ll get back to the matter at hand.

The jive and quickstep were the dances on deck this week, which means there would be furiously fast footwork and hopes that no one tripped over their own feet. The biggest challenge, though, was that contestants weren’t mesmerized by Carrie Ann Inaba’s lioness mane at the judge’s table! Those clip-ins must have come from the “Cheetarah” collection! Thundercats!

Let’s do something different this week. There were alot of mediocre dances, which three contestants received the exact same score and kept and everyone very tight knit. I’ll review everyone’s score, but highlight the highest and lowest because my attention span is at an all time low and my blood alcohol level is at an all time high. It was wine o’clock as I was writing this.

Middle of The Pack: 22.5 went to Drew, Emmitt, and Joey. Emmitt is still my favorite. He is cooler than the other side of the pillow, and I expect to see him in the finals. Kelly was just a half a point behind at 22, while Helio and Mellisa gave solid performances with scores of 23 and 23.5, respectively. Apolo stepped his game up (but didn’t let go of that soulpatch) to garner a score of 24.5, which surprisingly placed him only in fourth place.

Best in Show: The highest score of the night, and the season thus far, went to Sabrina. Her quickstep was given a 26 and the first 9 of the season (and only one of the night). Sabrina dances like a pro. Like I previously stated, she should have been in the original cast and not relied on being voted in as the fan favorite. I should call her “breast in show” because those tig ol’ bitties almost knocked her out through the entire dance! Her posture and hold were perfection. She’s the one to beat.

Gilles was the closer and didn’t disappoint. The last to go is usually a crowd pleaser to bring the night to an end on a high note. His jive brought the house to their feet! Even dressed as a French Jerry Lee Lewis, the man still exudes sex appeal. 25.5

Shawn Johnson gave the audience a jive that woke them up after witnessing three same scoring routines. Like the gymnast she is, it was spirited and high energy. One word of advice, take it easy on all the damn high fives you give your partner. His name isn’t Bella, and this sure ain’t the mat! 25

Voted Most Likely To Say “It’s not about competing. It’s about having fun.”: It’s time to scrape the gum off the bottom of the desk. Kirstie (sigh), girl, you make us all laugh with you but tonight I’m throwing shade. Her jive was more theatrical than dance. Half of it she walked through, while the other half she barely kicked those cankles two inches off the ground. Although she was scored a 21, and it was the second lowest of the night, everybody loves Ms. Alley. She won’t be in the bottom two.

Now we come to the original Teen Mom, Bristol Palin. I didn’t need a crystal ball to foresee her future routine: TERRIBLE! What is up with her partner trying to bring out the “sexiness” in Bristol? Watching her shake her hips let me know she is a “Vanilla” in the bedroom. I was once told you can tell the way a person moves under the sheets by the way they move on the dancefloor. Ladies, be wary of men who move like they are operating a jackhammer. You’ve been warned! She may have transformed her looks into a young Stepford wife, but somebody needs to flip that robotic switch back to humanoid on the back of her neck. She received an 18, which put her in the bottom.

The Cowboys have a bye week coming up, so week three will contain just the right amount of cuntessa for my cherubs (Jennifer (my editor) do not take this line out!). Enjoy the result show on ABC and check back on Press Pass LA daily to get what matters. Besos!