THE DYNAMIC DUO BEHIND VIRGIN ALEXANDER 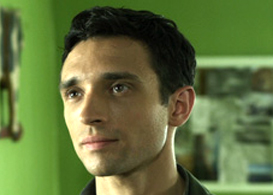 NYU graduates Charlotte Barrett and Sean Fallon always knew they wanted to make films. The pair met during a film production class at the Tisch School of the Arts and following college they both worked at the Late Show with David Letterman before moving to Los Angeles to pursue screenwriting. They married in 2006 and co-wrote their first screenplay in 2008. Four years later, their first featureVirgin Alexander, is taking film festivals nationwide by storm!

The duo’s first script Over Here placed in the top 5% of scripts in the Academy of Motion Pictures Arts & Sciences esteemed Nicholls Fellowship competition in 2008, and in 2009 their featureDenny Delivers placed in the top 20 at the Script Pipeline Screenwriting Competition. But it wasn’t until  this year that their first feature, Virgin Alexander took the leap of bringing their words to the screen.

The film stars Rick Faugno, best known for his role as Frankie Vallie in Jersey Boys and his one-man show Body & Soul at the Las Vegas Hotel (check out our Q & A with Rick here). In this film he plays the awkward, shy, but likeable lead Alexander Mann. It is Faugno’s stellar comedic timing and use of pregnant pauses that really drive his character home and make this one of the best indie films all year.

The female cast includes Paige Howard (Adventureland) as Ruby, a young women using prostitution to pay her way into college. (And yes, she is the infamous director Ron Howard’s daughter, though her performance clearly defines her own career.) Ruby’s character is the perfect polar opposite to Alexander’s virginity and she of course, becomes his love interest. Mika Boorem (Augusta, Gone) plays Brooke and Elizabeth Masucci plays Lo, Ruby’s female counterparts in the prostituion ring.

As for the men, Alexander’s best- and possibly only- friend Cliff is played by Patrick Zeller. Bronson Pinchot, most known as Balki Bartokomous from the hit show Perfect Strangers, rounds out the cast as Bim Norse, owner of a  local bar and pizzeria aptly named Bims. He is trying to save his struggling business and also the little league team he sponsors by acting as a local pimp. He plays a middle-aged man plagued by difficult decisions and his performance is at once repulsive and endearing. Adding to the heart of the film is its score, which was composed by Simon Charles Katz who collaborated with Faugno.

The plot in a nutshell is this: Alexander is a 26-year-old scrap hauler who has just been given a house by his grandfather. Alexander quickly discovers the home is in foreclosure and he has ten days to come up with $125,000. While on his route brainstorming get-rich-quick schemes with his co-worker Clif, Alexander meets Ruby, a college student moonlighting as a prostitute to pay her student loans. The three team up to turn Alexander’s house into a brothel. Everything is great except for Alexander’s guilt of operating a brothel out of his home, his growing feelings for Ruby, and the incredibly inconvenient fact that he is still a virgin!

This quirky and inspirational tale is at its core a micro-budget comedy of sex, love, and the survival of the human spirit. It is a comedy that focuses on character development and steers clear of using sex jokes for a quick payoff…and this pays off for filmmakers Barrett and Follon, who are already working on their next feature!  Luckily, they had some time to spare for Press Pass LA:

PPLA: Why did you want to make this film?

CHARLOTTE: We came to filmmaking through writing and we have written severals scripts together and have done well in competitions, but moving to Vegas in the midst of the foreclosure situation inspired us to make something about foreclosure that wasn’t ripped from the headlines. It was just an entertaining take on the horrible situation of foreclosure.

SEAN: Every neighborhood in Vegas, even the nicest of areas, have been hit by foreclosures. So it was just amazing to us how widespread it was, and we wanted to make a movie about that but not make it overly dramatic. We wanted to tell a story about foreclosure and who is the least capable person of dealing with that issue and what is the worst idea you can come up with to try to save your home.

SEAN: One of our neighbors asked if we based it on them, and we were so surprised. We said ‘absolutely not’ but it was such a crazy coincidence.

PPLA: So life imitates art and art imitates life! How long was the process of writing the script to getting it made?

SEAN: It probably took about 6-8 months to write it, and then in January of 2010 we hooked up with a producer out of Texas who liked the idea and wanted to make it. We decided to work together and the money came togetehr so quickly, faster than we ever thought. We were shooting by June.

CHARLOTTE: We shot it in upstate New York, in Saratoga Springs, a really film friendly town with no permit requirements which is a God-send for a low budget film because we didn’t need to have a cop on set which gets costly, and they let us shut down streets.

SEAN: The area is known for horse racing and every July and August they have races. Seabiscuit and The Horse Whisperer shot there, and they are trying to expand beyond just horse-themed movies. They were very welcoming.

PPLA: So after horse-racing, brothels was the next step?

SEAN: (laughs) It used to be a big gambling town so they did have brothels! We actually saw where one of the old brothels was located.

PPLA: How did you decide on Rick Faugno for the lead?

SEAN: Rick was the only actor we cast without meeting or auditioning. We usually want to see, beyond are they talented, do they speak the same language as us? Will we get along on set?  That sort of thing. But with Rick, we got free tickets toJersey Boys through a give-away at the Fashion Show Mall. So we went!  If you’ve ever seen the show, in the opening act the fourteen-year old Frankie Vallie comes skipping across the stage singing “Silhouette” and as soon as I saw that, we both thought, ‘that’s Alexander’ and it was Rick in the role.

PPLA: Tell me more about the infamous piano from the script?

CHARLOTTE: When we wrote the script, the piano was part of the focus because that is what the character Alexander really wanted to do with his life was play piano. But when we cast Rick, we realized he can sing and dance and we had to incorporate his other great talents. Othewise, it’s like leaving money on the table. So we added in that he would sing songs along with playing. We actually found that piano on Craig’s List. We had two pianos actually- the stunt piano and the one that actually worked.

SEAN: They looked similar and we painted one to look like the other, and my uncle took out about 300 pounds of metal inside the stunt one out so we could tow it along the dump truck. After the film, we had a guy that was driving from New York to Vegas and we shipped the piano from set to Rick as wedding gift because he got married about a month after we finished shooting. What is funny is that when we met with Rick he didn’t know how to play piano. We told him it was fine because our composer had similar hands and could stand in. He hated that! Rick is so determined that he basically learned how to play all the songs for the film in three days. He played every track on the film and album, and he now plays piano in his one-man show. We thought that was pretty cool.

CHARLOTTE: We were really blessed with an actor that was so talented and so willing to work.

PPLA: What was it like directing together and for the first time? Were their any scenes you were especially excited or nervous about?

CHARLOTTE: We had a scene toward the end of the film with about 17 characters where all these story lines come together and converge.

SEAN: We were going over our schedule with our producer and we only had Bronson Pinchot available for one week and all the other cast was available the entire shoot.  So we had to decide if we wanted him at the beginning, the end, etc. We hadn’t directed anything since our short films in college and we said, ‘we need that to be the last week because we don’t know how to do that yet’. (laughs)

CHARLOTTE:  We shot this film very quickly, in about 18 days. Having that many actors in one scene was a bit daunting. We called that scene ‘The Monster’. We had to shoot it in a way that was dynamic without getting a lot of coverage on each actor. We look at every challenge as a chance to grow but that scene definitely earned its nickname! Luckily, shooting this at the end of the filming worked out because these actors knew their characters better than even we knew them.

PPLA: What’s the plan next for this film and your future projects?

SEAN: We did the festival circuit for most of 2011 and played all across the country. We now have distribution for this film. We sold out on Amazon our first day. We recorded an audio commentary on the DVD with Rick and some behind-the- scenes footage which is now available.

CHARLOTTE: It was cool to see how the film played and was received in different areas, say New York City versus South Dakota, or Kansas, or Michigan.

SEAN: We were worried that a DVD about a brothel was going to be sold with…well, boobs! Or with an American Pie feel, which if you have that expectation of a sex-comedy or a rom-com you might be disappointed. So we were really happy with how the film was sold and marketed.

CHARLOTTE: We tried to deconstruct some of the typical characters in a sex comedy and show them as real people, who are flawed but sweet.

SEAN: The next film is going to be another comedy, maybe a little darker than Virgin Alexander. We are writing it now and putting that together.

CHARLOTTE: It’s not going to be about a brothel! (laughs)

PPLA: Maybe it will be about horse-racing!

CHARLOTTE: Yes and we can go back to Saratoga! (laughs). We are planning to shoot this one in Texas actually, where I am from. We do plan to direct this film as well.

PPLA: Any advice for other writing partners or new directors?

CHARLOTTE: Sean and I are both on Facebook & Twitter, and if you’re a young filmmaker and have questions, please reach out to us. We’d love to talk to you!

The film is currently available on Amazon.com and Netflix.com. VisitVirgin Alexander.