The Eastwood Ranch Foundation First Annual Garden Party was everything you’d expect from an Eastwood…country, classy, elegant and simplistic. The annual garden party sat atop a hill overlooking Malibu Wines on one side and canyons, rock formations and the ocean, far off in the distance, on the other side. 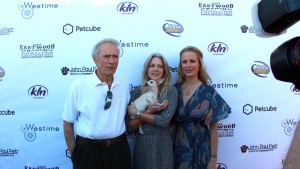 You would think going to an event with the name “Eastwood” attached to it would fill your insides with nerves and intimidation, and it definitely did! However, the moment I got to the party there was calmness in the air and I was instantly put at ease. I attribute this to the kind and laid-back nature of Alison and her crew.

Alison Eastwood was breathtakingly beautiful and calm greeting every last guest as they walked into the party. Despite this being her foundation’s first garden party, Alison maintained composure like her famous father Clint does in all of his movies. Her husband, Stacy Poitras, was the best sidekick and was a true rock star when it came to helping Alison out with guests, the red carpet and making everyone feel comfortable. 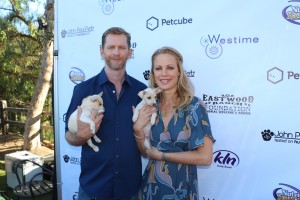 The Eastwood Ranch foundation helps rescue, raise awareness and money for homeless animals, as well as transport animals to areas where they will get adopted. Besides Clint Eastwood stealing the show upon his arrival, there were two Chihuahua puppies also commanding the attention of pretty much every guest. When I spoke to Paula Malcomson of “The Hunger Games” series she had Ned, one of the Chihuahuas, glued to her arms. She told me one of the reasons she worked with Alison on a movie was because of the Eastwood Ranch Foundation and what it stood for. Her advice for the people who DON’T understand the importance of adopting, spaying and neutering: “Just get a grip! The best dogs come from the shelter.”

Many of the celebrities who walked the red carpet voiced Malcomson’s same opinion. Adopting is key to helping animal homelessness in L.A. as well as keeping dogs and cats out of kill shelters. I always find it interesting when families or individuals adopt an animal, but for some reason have to return their pet to the shelter. I asked Marcia Gay Harden her thoughts on adopting a pet and then returning it. “It really depends on why they returned it. Was it because of an illness, or they didn’t have time to properly care for it. I mean it’s like having a toddler.” She continued to tell me about how her 10-year-old daughter (at the time) wanted to adopt a dog, but she never took care of the dog. Harden’s daughter’s word of advice, “Mom never let a 10-year-old adopt a dog. If you’re a parent going to let your child adopt a dog, it’s on you and you’ve got to know that.”

My final interview was with Denise Richards and I think she said it best, “When you become a celebrity that [raising awareness for a cause] is the gift. To use your celebrity as a platform for whatever cause you’re passionate about and I feel like that is why you are able to be recognizable.” 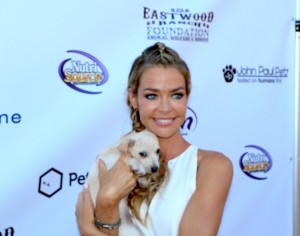 As I mentioned earlier, Clint was the showstopper of the afternoon, but he zoomed past the press line and didn’t do interviews, but Press Pass LA was able to snap some pics, so enjoy!