In their own words, “The Echo Society is a Los Angeles based collective of like-minded composers, musicians and artists who gather together to share new sonic and visual art locally—with special guest appearances.” These experimental folks clearly haven’t rested since their first installment this past December, a performance aptly titled, Winter.

So far both events have sold out the legendary Mack Sennett Studios, but last Sunday’s Solstice was distinctly something bigger. Upon entering the simultaneously contemporary and rustic space, guests were optioned with an assortment of rooms to meander. The foyer hosted light bites, which led to a smaller connecting room set up like an old barbershop. Angel City Brewery and Lillet and Fair Quinoa Vodka provided refreshments, and a unique photo booth from PHHHOTO yielded a hands-on experience.

The performance was a gorgeous ensemble blending orchestra and vocals with digital sound, and featured the following talented lineup:

Eirikur Olafsson—Hvarf
Eirikur is an Icelandic trumpet player who has toured with Sigur Ros, Seabear, and Kira Kira.

Brendan Angelides (Eskmo)—Perspective
Brendan is an electronic music producer hailing from the US and presently residing on the East side of Los Angeles. He has his hands in Ninja Tune, Warp Records, and Planet Mu.

Judson Crane—Three Seas to Mosera
Judson is an LA based composer, producer, and arranger with credits on Wish I Was Here, Don Jon, and Looper, among others.

Jeremy Zuckerman—Every Last Crumb of Day
Jeremy is an Emmy Award-winning composer who once worked with David Lee Roth and has contributed to countless television show and films.

Nathan Johnson (Featuring Faux Fix)—Airmail
Nathan is a composer, producer, art director, and songwriter with contributions to Looper, Brick, and Don Jon. He is director of arts collective The Cinematic Underground and art director of The Made Shop.

Rob Simonsen—The Sun Stood Still
Rob is a film composer and music producer who contributed to the score on Wish I Was Here, 500 Days of Summer, and additional tracks on Moneyball and Life of Pi. He was nominated at Sundance for his work on The Way, Way Back and The Spectacular Now and provided the piano music on Apple’s iphone 5 commercial. 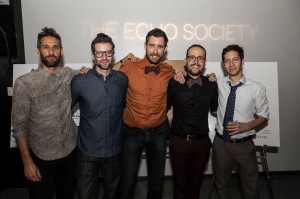