For those of you who watched the Oscars, you know about the pizza moment and you know it’s been talked about since then! The morning after the Oscars, on Monday March 3rd, news crews all lined up on Martel Street to get their interviews with Edgar Martirosyan from Big Mama’s and Papa’s.

He also appeared on the Ellen show and Pierce Morgan Live. I watch the Ellen show every day because I find it entertaining and fun. So imagine my surprise when I saw a sign posted on my own building (right on Martel) that her show was going to film on 3/13 at Big Mama’s and Papa’s just 20 feet away!

I also follow Ellen on twitter, and here are a few of the posts she had: “Try the pizza I ordered for the Oscars! Go get a slice @BigMama’sNPapa’s at Sunset and Martel. You could get a lot more than pizza.” – “2 questions – Do you like cash? Do you like pizza? Then why aren’t you at Big Mama’s and Papa’s Pizzeria on Martel and Sunset?”

Of course I showed up nice and early, (Ellen had suggested getting there by 2PM), and the crowd was already getting big! The Ellen show crew were friendly and had tons of energy, keeping the crowd  entertained the whole time and interviewing each and every person that showed up. They even chose the most energetic people and got them into two groups. They handed out raffle tickets for 10 lucky winners once the show wrapped, and they had a jingle contest to see out of the crowd, who could come up with the best jingle for Big Mama’s and Papa’s!

Edgar did a streaming interview on camera as well and that will be on the Ellen show tomorrow March 14th 2014. I just hope with all the commotion I can still get my usual pizza order! 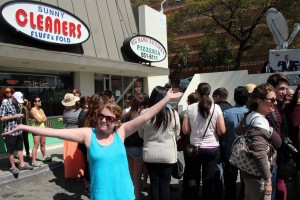 Follow the Ellen show @TheEllenShow and tune in to watch her on NBC at 4PM daily.