This was a tour that I was very excited to see. Emblem3 embarked on their #bandlife tour with fellow artists MKTO and Jackson Guthy. I got a chance to shoot photos a few months back of Emblem3 and I couldn’t wait to do it again. 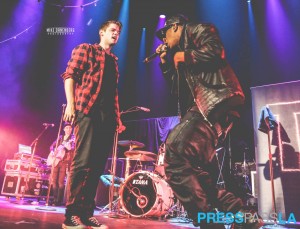 I headed to Club Nokia at LA Live where the line was forming outside the venue. Lots of fans seemed quite anxious to get inside, and it was definitely worth the wait. Many purchased VIP tickets and attended a meet and greet prior to the show. The guys are known to really care about their fans and always take the time to snap a photo.

The night started off with pop artist Jackson Guthy. He filled the room with energy and got all the girls screaming along. He was a great addition to start off the show. Out came MKTO which really brought great vibes. I actually recognized one of the frontmen, Malcolm, because he was in the tv series LOST. They performed some of their well known tracks including “Classic.” They even busted out a cover of Lorde’s “Royals” to get the crowd involved. I really enjoyed their set.

They were ready. Chants of “Emblem3” surrounded the room in anticipation for the guys’ entrance. The stage had a very neat setup. They designed it as if they were performing in a garage for all of their friends. They even placed a mini skate ramp for extra authenticity. Wesley and Keaton entered the stage, with Drew riding out on his skateboard. It got loud.

They started the night off with their track “I Love LA” off of their debut album Nothing To Lose. Next they performed hits such as “Reason” and “Just For One Day.” Each took turns getting off the stage and up on the rail to greet the fans. Not a moment went by without a smile on everyone’s faces. They soon performed an infusion of “XO” and Sublime’s “Santeria” which I loved. I really enjoy the musical influences that Emblem3 feeds off of. 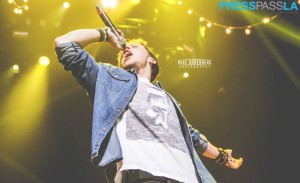 They brought out a young girl named Tabby who performed with the band on a small ukulele and another girl named Irish who came all the way from Philidelphia sang some backup vocals. At the next break, they brought out three fans who were contest winners during “I Wish.” They pulled up a couch and gave them the best seats in the house. Wesley and Drew each hopped on the couch with them during the performance. Everything seemed laid back. Everyone felt like best friends. This was truly a great show to attend. They also brought out a friend for her sweet 16th birthday. Seemed like they were doing everything they could to make the night special for as many people as possible. That’s a great thing to put out there.

The rest of their set involved Wes and Keaton switching off on guitar. They then performed a few acoustic tracks for the crowd. They gave a shout out to friend of theirs and fellow artist, Jake Miller, who was attending the night. Keaton took the mic and told the fans “I love you all and this is our last song.” The girls went crazy.

Finishing off with a cover of “Hotel California,” Wesley introduced the band performing with them and their lead guitarist busted out a great solo. At the closing of the song, fans knew which song was up next, and it had to be “Sunset Blvd” which they performed as their audition song on X Factor. I loved it when I heard it first on that show, so I was excited to see it live. Drew then took a leap into the crowd, amplifying the energy in the room times ten. I was able to capture a great image of that, so make sure to browse the gallery! 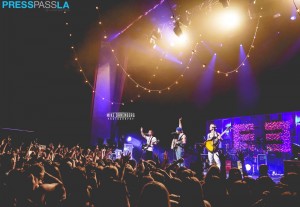 Make sure to go out and buy Emblem3’s debut album Nothing To Lose on iTunes and major retailers. And come out and see a show of theirs!

Check out the PHOTO GALLERY from this concert!