After the highly anticipated spring premiere of Empire,  the Lyon empire lay in ruins. Luscious’ house is littered with shattered glass and blood. Cookie is filled with regret after her kiss with her ex husband. Their story is far from over.

It is an epic love story not unlike Tina and Ike, the Lyon history has been a focus for most of this season. First of all, we found out that Luscious is really named Dwight and Cookie is Loretha.  With most of the prime time dramas,  audiences have gotten the pleasure of enjoying the performances of classic black actors and actresses playing maniacal parents. This is expertly done on shows like  How to Get Away With Murder and Scandal. Leslie Uggams, as Luscious mother, is  pure crazy. She is convinced that Boo Boo Kitty has to go. Well she finally gets her way. She went to Luscious’ half- brother to force him to get her to leave. This woman is diabolical.  We finally get an idea why Andre is the way he is. Unfortunately since Rhonda’s death, he has been on a downward spiral. His goal is running Empire and his father dead. 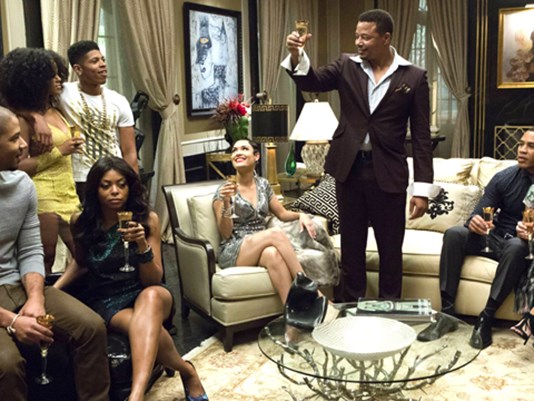 Part of the charm of the flashbacks is seeing the young Luscious and Cookie. Ajona Alexus and Jeremy Carver capture young love. The audience is ring side as they see the young Empire being formed. Cookie is retrospective as she thinks about the young boy who took her viriginity. She knows Luscious but she continues this relationship with Angelo. She doesn’t want to blow it, so she makes the decision to keep her encounter from him. Both Jamal and Hakeem are taking on new roles. Hakeem is directing Tiana’s new video and Jamal’s been collaborating with Tori Ash (Rumer Willis) . But Hakeem is getting ready to get a bigger role,  Boo Boo Kitty is leaving .Before she goes, she drops off Bella with her daddy.  This should be great news for Becky because she was mad that Anika was appointed director of artist development. With her gone, Becky will finally have her dream job.

But all is not well in the Lyons Den,  Shine has been working with Andre. Andre has big plans for the Empire. One of the biggest plans is that he wants to kill Luscious. Shine has been watching him carefully since he has been seeing Nessa. He is very protective of his sister and knows that Andre is manic depressive . He warns Andre that if he touches Nessa , he will kill him. Shine also wants Andre to meet the notorious Raphael. Raphael runs Vegas . He didn’t expect to meet with Andre, he wanted a meeting with the King  himself, Luscious. Seeing Andre, he immediately feels double crossed and takes out his gun. Before he can turn around, he is dead. Andre is speechless as he sees two dead men on the floor. Giuliana and Andre make a deal. What do they have in mind for the Lyon Empire?  There is a showdown on the horizon as two men vie for the love of Cookie. Luscious or Angelo? It’s getting serious.