IS THIS THE END OF FASHION POLICE? KATHY GRIFFIN TWEETS HER DEPARTURE

E!’s Fashion Police is known for putting celebrities in the hot seat but lately they are the one’s tredding water.  Kathy Griffin announced today she is departing the show after a mere seven episodes? Is this the end of an era?

The fate of Fashion Police hung in the balance after the tragic passing of icon Joan Rivers. But it seemed, even momentarily, the show would go on…and with Rivers’ friend, funny lady Kathy Griffin in her stead (at the request of Joan’s daughter and show producer Melissa Rivers).

But after a PR debacle by Giuliana Rancic on the Oscars red carpet -see “patchouli oil and weed” in reference to Shake It Up star Zendaya’s dreadlocks- it’s all been downhill.  After coming to Zendaya’s defense on Twitter, co-star Kelly Osbourne announced her departure from the show just days later. Rumors swirled whether Kelly was looking for an exit strategy from the show or if this incident was the true catalyst. Osbourne had publicly been mourning the loss of her co-star Rivers, who she considered a true friend and mentor. Was this the last straw? Or had the rumored on-set animosity toward Rancic for supposed diva-like behavior finally come to a head? 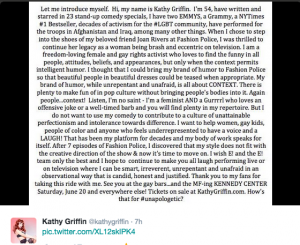 Either way, Kelly’s departure was soon trumped by headlines that Griffin would too be leaving the show, citing “I do not want to use my comedy to contribute to a culture of unattainable perfectionism and intolerance toward difference,” a clear jab to the show whose premise is to poke fun at the red carpet fashion and image of celebrities. Osbourne quickly came to Griffin’s support via Twitter.

Throughout all of this Rancic has remained mum, most likely at the wise suggestion of  her PR team and the network.

Do you think Fashion Police can recover from so much turnover and turnmoil? Can Rancic survive this PR firestorm or will she lose her job at E!?

And more importantly, is it time for a change in content? Fashion Police and Joan Rivers commentary has long been a staple of the red carpet and awards season, but is the public tired of this negativity toward body image, even when it’s for a laugh, or has media just become too sensitive?  Let us know in the comments below.