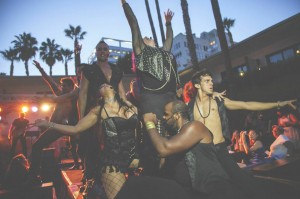 The headliners Top Rock, the edgy brainchild of Live it Up Productions, featured exceptionally talented vocalists who took concert goers on an an epic journey of cover songs.  Stunning dance moves and classic rock songs with intense vocals-  think Broadway but sexier!

The evening also featured a fashion show by Babalu  which displayed their newest styles. Top models walked the runway in their bathing suits and yoga gear as Emii (who has collaborated with Snoop Dogg and shared the stage with Flo Rida) sang to their catwalk. Check out her latest single Fiesta (We Own the Night). We also enjoyed the music of Sabrina Anotinette who was discovered by Chris Brown and recently played SXSW. You can listen to her tracks here. 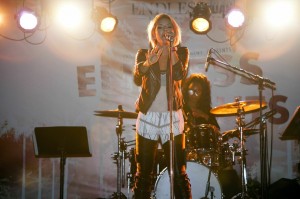 Our favorite performer of the evening was boy band Belmont Lights led by frontman Isaiah Blas. This band who did a mix of original music and covers left the crowd wanting more. It is no wonder they were named the 2013 NATIONAL RAW ARTIST “Musician of the Year”. We can’t wait to see what 2014 bring for these gentlemen! Take a listen.

Red carpet talent and performers were pampered and fashioned by Bakoas Aveda Salon and Geisha Studio and privileged to drinks sponsored by Monster energy drink and a full bar. The event brought in a crowd of over 500 attendees. 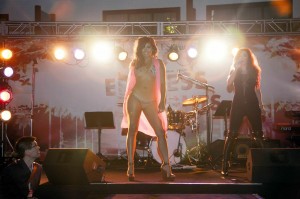 Sponsors of this event included Amp Radio, Monster Energy Drink, TheDropTV, NRPR Group,  Len Steckler’s Fashion and Beauty Art Retrospective showcase, Babalu Fashion,  Bakoas Aveda Salon, and Geisha Studio. Due to the success of the event, Endless Road Entertainment will be hosting another concert at the end of the summer.

If you didn’t make this event, second chances don’t come often so don’t miss out!