Fig & Olive played home to one of the hottest parties in West Hollywood Saturday night, the Entertainment Weekly Pre-Emmy bash presented by L’Oreal who debuted their new “Makeup Genius” app.

Hollywood’s elite, some of TV’s finest, and past nominees gathered to celebrate another year of great television and honor this years nominees. 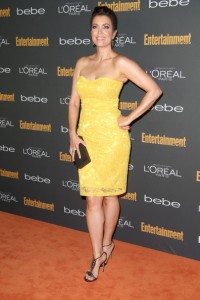 The most talked about show on the carpet was arguably Scandal, with celeb fans ranging from MTV Awkward’s Greer Grammer to Orange is the New Black’s Lorraine Toussaint who gushed about her favorite scenes and also noted, “there wasn’t enough sex this season.” Agreed! “Surreal” was her choice word in describing the success of OITNB and the phenomenon it has become culturally, “changing peoples minds and opening them up…hopefully ridding some of the ‘isms, and that’s meaningful and we’re entertaining while we’re doing it.” The show, director, writer and several of Toussaints castmates are all among this years nominees. Could OITNB be the show to snag the Best Comedy Series Emmy from Modern Family this year? That’s my vote, though it would be cool for Modern Family to take it five years in a row.

PLL spoiler alert: someone is dying this week on Pretty Little Liars, “it’s a character who’s very precious to the show, it’s always sad when this happens,” but Pieterse didn’t disclose who it could be or who the killer is.

American Horror Story’s Sarah Paulson, Best Actress in a Miniseries nominee is “prepared to lose but grateful” to be nominated since she was a shoe in last year but lost. Paulson did disclose her losing induced cravings: Doritos, French fries, Fritos, chocolate, ice cream…see? She’s just like us! Here’s to hoping her Emmy night has a happy, junk food-free ending.