You will either love or hate the Entourage movie, there’s not much wiggle room.

Coming to the movie as a fan that has watched the entire series multiple times it is hard not to watch the movie with a smile on my face. There’s something about the undying bond of Vince (Adrien Grenier), Turtle (Jerry Ferrara), Drama (Kevin Dillon) and E (Kevin Murphy) that makes even the worst moments watchable.

That being said, being viewed as a movie it is pretty bad. Director Doug Ellin (who pretty much ran  the show through its entire run) has made almost no effort to change the way things are blocked or shot despite the change of medium. This works both for and against it. The end result is a relatively loose movie with a lot of walking and talking, just like you see in each episode.  Between that and the mostly on-location shoots in the right conditions it could feel like an Altman film. Unfortunately the material doesn’t live up to those standards. 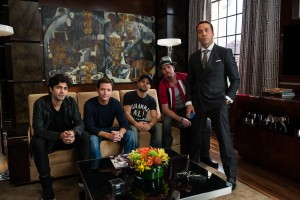 The boys of Entourage are back.

The film itself picks up right where the series left off and doesn’t skip a beat. Within the first five minutes all the loose ends of have been tied up and the movie is ready to move forward. Ellin has essentially retconned the Entourage universe back to where it was at the end of season four. The E/Sloane relationship is still a big focus, Drama is back to auditioning and Vince’s career will once again be made or broken by how well a movie that he helped create does at the box office.

Fans of the show will love the inside jokes and almost every celebrity on the planet makes an appearance at one point though very few of them feel forced. Strangely, two major characters were totally written out of the movie for unknown reasons. Both Scott Caan and Beverly D’Angelo have somehow simply vanished. For fans of the series it makes very little sense.

Much of the plot is devoted to convincing Vince’s film investors (played by Billy Bob Thorton and Haley Joel Osment) to put in more money. This leads to an eventual conflict of interest that, however silly it may play out on screen, is fairly common in the world of moviemaking.

The problem is if I were to see the film through new eyes and without having watched the series it is safe to admit that the film itself isn’t very good. Granted there’s a quick bit of introduction to each character at the beginning catching the viewer up but after that you’re pretty much thrown in without a paddle.

Sometimes it works for TV shows that become movies, sometimes it doesn’t. This is one case where it just doesn’t. Not for lack of trying though, Entourage does seem like a concept rife for exploration on the big screen.

In the end the film is sure to divide both critics and audiences.  While it’s not the best movie ever Entourage has a new place on my guilty pleasure list.