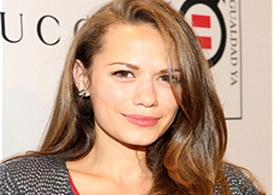 Stars gather at the Equality Now event to make equality a reality for women and girls around the world It was an inspiring evening in Beverly Hills Monday as celebrities and philanthropists all gathered for Equality Now’s “Make Equality Reality” event.

Now’s global work to put an end to violence and discrimination against women and girls. Held at The Montage Hotel, the gala was hosted by Paul Reiser and featured a special performance by two-time Grammy winner Colbie Caillat. Founded in 1992, the organization advocates for the human rights of women and girls around the world through legal advocacy and public grassroots activism across the globe. “What’s important about Equality Now is that is has women on its board from every continent, so this organization understands what to do from the grassroots up.” said legendary activist and Equality Now chair board member Gloria Steinem. “It’s very, very effective. For 20 years, whenever I do international work, I’ve always done it through Equality Now.” added Steinmen, who spoke at the event that honored Emmy-Award winning writer Joss Whedon for his work on gender equality.

“The work they’re doing is critical in the lives of women and girls who are generally ignored by their own societies, let alone ours.” said Whedon. “The amount of time and energy they’ve spent, the people they’ve helped, the way they’ve changed laws, the way they’ve changed the way people look at the laws in their own countries; it’s a huge deal. For me it’s so important that they get the recognition that they deserve.”

The profound impact Equality Now has made is what actress Bethany Joy Lenz says what most inspired her to join their mission. “Equality Now is the first organization that I came across that was actually going in and changing laws and making a difference. I trust them. I feel like they have been and can do a lot.”

And that they do; just a few of the issues Equality Now works on through its campaigns include: globally repealing and amending sex discriminatory laws, banning child marriage, putting an end to human sex-trafficking, and creating and implementing a government strategy to end female genital mutilation. “The prevention is something that I am really passionate about. To prevent things like sex-trafficking, which is only one of the many, many issues involving women’s rights around the world.“ said Lenz, who added that the platform and influence the American media has can play a significant role in raising further awareness on the importance of protecting and recognizing the fundamental human rights of women and girls. “I think we set an example here and I think a lot of it starts with media, which is why I think it’s so important for people like Joss Whedon, who want to be forerunners and stand behind this organization and produce material out there that’s not perpetuating an image of weak or objectified women. I think because America is such a representative in so many ways- it leads so many cultures and thoughts- and with the media, there is a lot we have to be able to put out there nowadays.” explained the “Dexter” actress. “There’s a big stigma that we need to overcome for a wider perspective: what equal rights for women really means and why it’s so desperately important.”

Steinmen said she believes the United States can take on a stronger role in helping to prevent violence against women- which as Equality Now states is both a cause and consequence of gender inequality. “The women’s movement all together gets less money in this country than any other nation.” said Steinmen. “We can’t neglect this country because if you add up all the women who have been murdered from their husbands and boyfriends since 9/11, and then you add up all the people who were killed in 9/11, and Americans in Iraq and Afghanistan, more women have been murdered by their husbands and boyfriends. We spend all this money on terrorism, but we don’t attack the idea of masculinity. Men didn’t invent it, they got born into it. We have to change it.” She added that the most effective way to empower girls and ensure a life for them where they can realize their full potential is through legal advocacy and action. “We can change the law, which is what Equality Now does. We can make child marriage against the law. We can make it possible to control your own fertility and your own sexuality. We can do away with sex-trafficking. The single biggest cause of death in the world for teenage girls is pregnancy, because of child marriage. We can do a lot.”

“How I Met Your Mother” star Alyson Hannigan said events like this and the work Equality Now does is crucial to holding governments accountable to the injustices facing women around the world. “It’s necessary to bring attention to the fact that there is a difference still; Equality Now is such an important organization. Especially, for me being a mother of two girls.” said Hannigan. I think just leading by example is the best method in my opinion.”

Through their Equality Action Network, which is comprised of groups and individuals in more than 190 countries, there is no doubt this organization along with its passionate and notable supporters is a leading example of what can happen when people get together to instill change and hope in the lives of others.

To get involved and learn more about Equality Now, visit EqualityNow.org