Every summer newsstands are set ablaze with the annual ESPN Body Issue. Press Pass LA was on the red carpet of the Body at the ESPY party when some of the world’s top athletes came out to celebrate the company’s highest grossing issue every year.

The party was held at Lure nightclub in the epicenter of Hollywood.

Light-bulbs flashed as entertainment and sports worlds collided to celebrate the best (and fittest) bodies of the human race. I mean who doesn’t want to see tennis star Venus Williams or guaranteed future hall of fame, Wide Receiver Larry Fitzgerald in their birthday suits?

All of the photos in the issue accentuate the sheer athleticism of each individual within their respective field. It also reminded me that my diet starts NOW!

Inside Lure nightclub, an open bar and generous appetizers were passed around before guests got to experience the reunion of 90’s super-group, SWV performing all of their top hits. I’m sure there are plenty of videos on instagram with the hashtag “jealous much” following it. 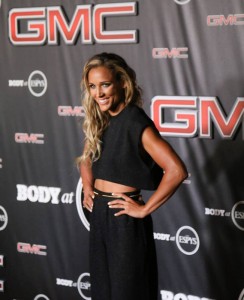 The body issue party is always the predecessor to the next night’s ESPY awards, so anybody who is anybody is there. And if you’re asking yourself, “Was that Taye Diggs that just clinked glasses with me?” Yes….yes it was.

See the Photo Gallery from the this event.