Day one’s highlights included: The day’s keynote interview featuring Danica Patrick, she spoke with ESPN’s Hannah Storm sharing insight into her racing career coming to and end and post-retirement life with Green Bay Packers quarterback Aaron Rodgers. Danica Patrick shared with attendees what she was experiencing toward the end of her racing career. “The last few years I thought it wasn’t that fun, but I was given a unique job, a unique talent,” she said, revealing that she kept racing because she felt responsible to inspire children to go after what they desired. “When racing was coming to an end, I didn’t want to lose the platform to inspire. Moving forward with any projects, I want to inspire to dream and to exude positivity.” 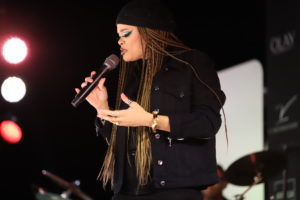 Before closing out Day 1 of the Summit with a moving performance of “Rise Up”, Andra Day spoke with ESPN’s Cari Champion, confirming she will star as the lead in Lee Daniels’ Billie Holiday biopic titled “Billie” after months of swirling rumors.

The “USA Hockey: Road to GOLD! and Equality” panel featured Olympic champions Meghan Duggan, Hilary Knight, Jocelyne Lamoureux-Davidson and Kendall Coyne Schofield being interviewed by Julie Foudy, and covered topics including the team’s stunning win against Team Canada in the 2018 Olympics and their continued fight toward equality within the USA Hockey organization. “There was no way we weren’t winning,” said Coyne Schofield of the gold medal game which, in essence, was a rematch of the 2014 Olympics where Canada came out on top. Team captain Duggan, who recently married Team Canada’s Gillian Apps, expressed to the crowd the feeling at the time. “I feel like we just had this deeper purpose and mission that we all felt in our souls.  We were in it together. We had been through so much together. There wasn’t anything that could come in our way after what we had been through together.”

All in all, an inspiring first day for attendee’s of espnW’s first ever women’s sports summit. Were looking forward to what the future holds.