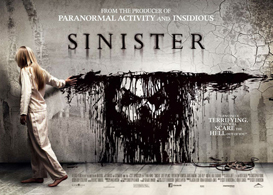 Everything that could be said about Sinister can be summed up in its opening scene. Four members of a family; two children, a mother and a father, are shown bound with their hands behind their back, burlap sacks placed over their heads and a noose around their necks. The noose is set up as a part of a pulley system connected to a separate branch. The branch is cut slowly with a saw, and once it falls, the rope pulls them up. We see their feet twitch, writhe and fight until, one by one, they stop.

Did that visual disturb, perturb, haunt or even chill you to the core? Stretch that feeling trickling up your spine for nearly two hours and you have Scott Derrickson’s Sinister. The story focuses entirely on Ellison Oswalt, played by Ethan Hawke. Ellison is a true crime writer who is slightly past his prime. Wanting to regain the glory of his hit book from ten years prior, he takes drastic steps to truly immerse himself in the story. He moves his family into a house where four members of a family were brutally murdered as described above, and does so without informing his wife and children. He hears a bump in the attic one night, and happens to find a series of banally named 8mm home movies. Each of them features a seemingly harmless home movie, only to be concluded with the brutal, simultaneous murder of the entire family, save one child.

Shortly after his discovery, he begins hearing things and constantly feeling a haunting presence. The further he delves into the investigation for the book, the more he finds himself over his head. The only drawback of this character might be the reprehensible nature of Ellison himself. Obviously, wanting to get back to the apex of his profession is admirable, but his refusal to take a more practical occupation to support his family is repugnant. However, how it is used is befitting; after all, pride goes before a fall. Combine that with countless “Don’t go in there!” and “look out behind you” moments, and you have a groan worthy character.

Horror films are entirely dependent upon creating a terrifying atmosphere that directly affects a series of characters that the audience has emotional investment in and Sinister has this in spades. The musical accompaniment is continuously haunting as it gradually builds to a fever pitch. Ellison watches each of the silent 8mm films, with each of the murders getting more and more intense as he views them. He starts to see the pattern in them; he also sees the pattern develop in his own house. The entire movie builds toward its climax, which, although at times is predictable, is still completely chilling and frightening.

More than the chilling atmosphere, what really add to the movie is the characterizations. In addition to providing an excellent development for the characters, it is a necessary catharsis. Too often, horror films are either scary scene after scary scenes without giving a chance for the images to set in or worse, the scenes are virtually filler that only serve to make the characters more unlikeable and their inevitable deaths ineffectual.

Sinister might be one of the scariest movies that’s been released in the last 10 years that, although isn’t a completely original idea, is executed so well that any lack of originality is completely forgivable. The Oswalt family is a traditional American family; middle to upper middle class, two children living in the suburbs of Middle America. We want them to live, and we want them to succeed, making any of the events that may befall them all the more tragic. The pacing of the film allots for a slow build that keeps the audience at the edge of their seat. The music and what the characters see and don’t see is what is truly terrifying. And the scenes that humanize the characters are legitimately enjoyable and provide exposition that would otherwise feel rushed.

Sinister is a legitimately entertaining movie that is both comical at times while maintaining an atmosphere of horror. It is no surprise it was helmed by the producers of Paranormal Activity and the director of The Exorcism of Emily Rose. Three and a half stars out of four.