This week, Eva Longoria debuted the short film “Lady Goal” focusing on the victory of Iranian Futsbal player Niloufar Ardalan to gain the right against her husband to represent Iran in the 2015 Futsal World Cup event in Guatemala.  The story highlighted the progress of women’s rights and one woman’s courage against abuse.

Niloufar, who had an exceptional 19-year Futsbal (a from of 5 on 5 indoor soccer) career, was forced to miss the AFC Women’s Futsal Championship ‘Asian Games’ held in Malaysia because her husband would not allow her to travel. Under current sharia law in Iran, married women have to have the permission of their husband to renew their passport and travel abroad.

After this setback, Niloufar showed immense bravery in the face of a culture where the rights of women are few. She decided to go to court where she won her greatest victory. The Iranian government ruled in her favor, granting her a one time single exit visit to attend the final World Cup event which Iran went on to win!

This decision showcased a progressive move by Iran on a global platform such as the Futsbal World Cup.  Niloufar’s story inspired not only a nation but women around the world and we were thrilled to get to speak with Director Tara Pirnia to discuss her film Lady Goal and how Hollywood star Eva Longoria came on board to produce for ESPN. 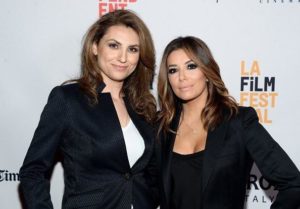 PPLA: How did you first become aware of Niloufar’s story and how did you reach out to her to create this documentary short?

TP: I read it online. ESPN had contacted me to direct a short for them and I thought the story would be a great fit for them. ESPN then showed it to Eva Longoria for her Versus series and we immediately went into production.

PPLA: Why did you think it was an important story to tell and what do you hope sharing this story will accomplish?
There are a lot of women in tough domestic situations not only in Iran but around the world. I was in a similar situation so the matter was very close to my heart. Both Niloufar and I hoped that if her story was told that it would help women to become strong and hope that there is an out to their dire situation.

TP: Niloufar’s story is very important as it shows how one woman decided to fight for her rights and how a country that is sometimes known for backing their male citizens made a groundbreaking decision to support a female. I hope this story will inspire other women to go after their rights and have Niloufar’s courage if they find themselves in a domestic abuse situation.

PPLA: Was Niloufar open to this documentary from the start or did it take convincing? Was there any opposition from her husband?

TP: Niloufar was very open to this documentary because she hoped that her story would inspire other woman to be careful of falling into a situation like hers and if that were to happen to have the courage to leave.

PPLA: Will the women of Iran have access to view this documentary? How do you see it as a catalyst for change?

TP: I think this decision shows that the government is slowly coming around to the idea that the women of Iran are not only talented but should have the independence to make their own decisions.

PPLA: Has there been any change since Niloufar’s accomplishment of gaining the legal right to play in the Futsal Championship against her husband’s will?

TP: It is mostly on a case by case basis, however I believe they are more open to hearing a variety of cases and a possible change in their current system.

PPLA: Iran won the Futsal Championship which was Sept. 26th and widely celebrated by the country. Has any progress been made in changing the laws since then?

PPLA: Has Niloufar made any other public statements toward the need for women’s rights since the victory?

TP: Only that she hopes to be an inspiration to women that are currently in her past situation. She did have a lot of fear when it came to taking her plea to the judicial system. Fear of losing her child, family support and her home. However, her family and friends stood steadfast behind her. She didn’t want for this to happen in this manner, but believes that if anyone wants something they have to go after it no matter what. 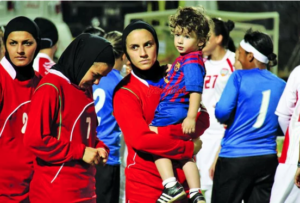 PPLA: What is the next big tournament or step for her?

TP: The team is preparing for the 2016 World Cup in Columbia and Niloufar is training to become a coach.

PPLA:  How did ESPN select this story to debut during ESPYS week?

TP: It was to be featured as part of Eva’s series as the subject matter is very close to her heart.

PPLA: Do you plan to turn this short into a longer film or perhaps a scripted feature?

TP: I was thinking about it. There was a lot more to Niloufar’s story that we couldn’t show because this was a short. We are currently speaking to Niloufar about extending the story into a feature.

You can watch Lady Goal on ESPN.