THE HOMESMAN: GETTING TO KNOW EVAN JONES

This week saw the limited release of Tommy Lee Jones’ take on the Western, The Homesman (look for our review here). The movie comes across as a love letter to both classic John Wayne movies and gritty films like Unforgiven or the modern True Grit. Full of bleak landscapes the film is at its best when it allows its star-studded cast to really shine. 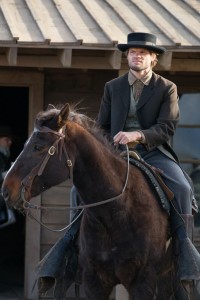 Part of that amazing cast is Evan Jones who, though he only appears briefly, lights up the screen with a fiery passion. Jones, who just finished up a run as Jim Collins in the History Channel’s Houdini miniseries and has been in everything from The Book of Eli to Gangster Squad. With his truly epic performance in The Homesman look for Jones’ star to be on the rise.

Press Pass LA sat down with Jones to talk about working on the film and where he would like to go next.

PPLA: What first attracted you to the role?

EJ: To be honest I was just sitting around and all of a sudden I got a call from my agent telling me that I should be expecting a call from Tommy Lee Jones with some big news. I still didn’t know what part I was going to play but I looked at the cast and knew I had to be in it. Once I got the phone call he told me he wanted me to be in his film and I was overjoyed.

PPLA: You’ve worked with many big name directors, what was it like working under Tommy Lee Jones?

EJ: It was awesome. I just saw the film last Tuesday and I was really blown away. He is without a doubt on par with some of the best filmmakers of our time and I’ve worked with a lot of different directors. He brought out the best in me.

At one point I remember he kept telling me to go slower in my reading and it really pushed me and my role. Looking back on the film it is amazing how funny it actually is. About a month after I finished up on The Homesman I started on A Million Ways to Die in the West, which takes place in the same era. Looking back it is crazy how remarkably similar the two movies really are though they take very different approaches to showing just how hard those times were.

PPLA: You just finished a film called Sun Choke, tell me about that.

EJ: That’s a very artsy horror film my friend was working on, I think everyone is going to love it.

PPLA: You’ve played a variety of different characters in every type of genre. Is there one character you’ve always wanted to play? What’s your dream role?

EJ: This is going to sound crazy but I’ve always wanted to do something along the lines of Tootsie.