AN EVENING WITH PANIC! AT THE DISCO

It was 11 years ago that Panic! at the Disco first burst onto the scene with their seminal debut album, A Fever You Can’t Sweat Out. In the ensuing time, there have been four more albums, with their sound veering from baroque pop to psychedelic pop to quirky pop rock, and now, to the electro-pop meets lounge sounds of the current album, Death of a Bachelor. The band, which started in 2004 as a quartet, is now comprised of a single member, Brendon Urie.

On Monday night, Urie paid a visit to the Grammy Museum for an short solo acoustic performance and intimate conversation with Grammy Foundation Vice President Scott Goldman. Dressed simply in a black t-shirt and black jeans, started the night with a two song acoustic performance of “Hallelujah,” and “This is Gospel,” a song he wrote for his best friend Spencer Smith, Panic’s former drummer.

He then sat down with Goldman for a conversation that spanned the influences of the current album, balancing fan expectations, and the importance of paying it forward.

Goldman started the conversation by asking Urie about Death of a Bachelor’s two main influences being Queen and Frank Sinatra. Urie told the audience that while those two performers were from different ends of the spectrum, they both were amazing frontmen, both amazingly charismatic, and both phenomenal singers. Brendon shared that the title track “Death of a Bachelor,” was a conscious attempt to write a Sinatra song, and that he had written it front to back on piano with vocals, and then, when it was time to do the string arrangements, he realized he didn’t know how to do string arrangements. He put the vocals over a track he already had, and it landed perfectly on that song and there it was.

When asked how he gets feedback now that there are no other band members, Urie replied that he has people who tell him 100% honestly what they think. He then talked about producer Jake Sinclair, who produced both Death of a Bachelor and Weezer’s White Album. “Jake is a big brother in terms of dynamic, how we work together.” Jake is very harsh, will tell Urie when a song is terrible, and “gives the best ass kicking I can ask for.”

Jake wasn’t listening to a lot of hip-hop, so for this album, Brendon gave him 10 albums: Wu-tang, Dr Dre, Kendrick Lamar, De La Soul, to let him know what was going to influence the sound.

Goldman asked Urie about the “level beyond” Sinatra-esque vocal performance on the album closer, Impossible Year, and if Urie knew he had that in him before. Urie credited Jake Sinclair with pushing him where he normally would have given up.

When asked about how he likes to end his albums on a bittersweet note, Urie explained how he loves juxtaposition and contrast such as in the Beatles “Getting Better,” where Lennon’s “Can’t get much worse” counterpoints McCartney’s optimism, and the Cure’s “Love Song,” which combines a sad melody with poetic lyrics.

Asked about the song “Victorious,” Urie told the audience that he was stuck on one part of the song, so Sinclair emailed the clip to Rivers Cuomo, who sent it back in 5 minutes with completed melody and words. 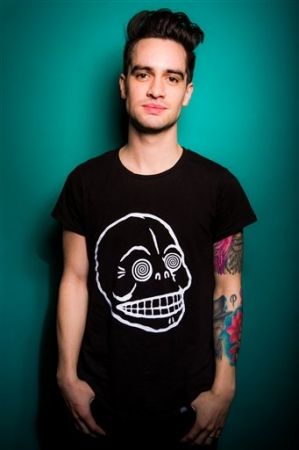 Branden Urie opened up about his career at the Grammy Museum .

e recorded most of this album in his home, but that “it’s dangerous not having limitations sometimes,” and then revealed that he was naked when recording half of the material. Recorded at home was “so cool, so unique.”

When asked if he likes to work fast, Urie compared working with producers John Feldman and Butch Walker, saying that with Feldman he worked 16 hour days and Feldman was “kicking my ass back in gear,” while with Walker they worked 10 minutes and then Walker offered him a beer. He said Walker is “the nicest dude, like a Dave Grohl,” and then said he would love to work with Dave Grohl someday.

When asked the track “L.A. Devotee,” and what about Los Angeles inspires him, Urie said that growing up in Las Vegas, L.A. represented all of the things he loved as a kid, like hip-hop, skating and surfing, and that it is place that is conducive for creativity. He’s met a lot of people in L.A. who are just is neurotic as he is.

Talking about trying to balance expectations between old and new fans, Urie says that he doesn’t think about that when writing, but it’s daunting in the best way possible to see familiar faces in the crowd when they are playing. It’s a huge blessing.

Asked about the quote “You have to bring something clinically insane to the live show,” Brendon responded that he was always told called crazy because he was really hyperactive. He comes up with crazy ideas for the live show like lighting himself on fire and shooting himself out of a cannon, and waits for people to tell him it’s a probably not a good idea. “It’s totally selfish, I want to experience it, I want to see that would be like, how would that feel…how much of a crazy adrenaline rush…it would be so empowering.”

When asked whether the process of recording is a means to an end of getting to the “blessing” of playing shows, Urie answered absolutely and that it’s the way fans will support and how that has given him the biggest push ever emotionally. “It’s so different when you are singing a song that you’ve written that is so close to you” Urie said, “saying that stuff to people and having them sing them back to you, it completely changes the meaning in the best way. I can kind of release it and it’s not mine anymore, it’s everbody’s.”

Urie talked about Fall Out Boy’s Pete Wentz signing them to a record deal before they had played a live show, and how that was completely “Pete’s stupidity.” Because of that he feels it is important to pay it forward.

He also shared that he is a hugely influenced by Imogen Heap, called Frou Frou a game changer and said he cried when he heard the song “Hide and Seek” because he would never write anything that good. She became the first person outside of the band that he co-wrote with, and that she is the nicest person who helped him gain confidence and taught him that he doesn’t need to care about anyone else’s opinion.

Next Brendon took a few questions from the audience about what was going through his head during the YouTube video “The Drunk History of Fall Out Boy.” He jokes that the crew tricked him into drinking vast quantities of alcohol and he doesn’t remember a thing, and what he has learned in life so far is to not trust [Fall Out Boy’s] Pete [Wentz].

When asked if he was going to pursue acting after going on recent auditions, Urie revealed he has been on a few auditions and that he had six callbacks for one roll, but that the process is so awkward. Still, he loves musicals, loves acting, and loves film.He then ended by saying that he while he hasn’t created his opus yet he feels that he is forever one step away, and doesn’t know if he really wants that satisfaction.

Urie then took to the stage again for two more acoustic numbers, “Miss Jackson,” and “Victorius,” and it was hard to not be struck with just how great his voice now sounds. The raw solo performance gave a new dimension to Panic’s current material and allowed his vocal power to shine.