EVER WISH YOU COULD OWN A HOLLYWOOD STUDIO? NOW YOU CAN! JOIN LEGION M

At Press Pass LA, we’ve always believed you are only as good as your fans! So, we were thrilled to be introduced to Paul Scanlan and Jeff Annison, the team behind Legion M who are allowing fans to become owners of TV & film content. Here’s how!

Legion M works with top Hollywood creators to make movies, TV shows and  digital content and thanks to brand new SEC regulations, fans can finally get in on the action!

Essentially, Legion M is a Silicon Valley startup that wants to crowdfund  Hollywood productions and is offering everyday fans the opportunity to invest in a slate of upcoming entertainment projects.

So if you’ve every been at home watching your favorite TV show or in a movie theater daydreaming about your chance to get involved, it has finally arrived. We sat down with Paul to get all the details.

PPLA: How does Legion M work?

PS: Legion M is the world’s first FAN-OWNED entertainment company. We work with top tier Hollywood talent to create movies, TV shows, and other interactive entertainment experiences. And for the first time in history, fans can own a piece of it.

PPLA: What was the inspiration behind starting Legion M?

PS: Empowering creators by engaging the fans. 15 years ago we started a company called MobiTV that helped break content out of the living room for viewers and fans to enjoy wherever and whenever they wanted. About five years ago, we introduced a company called New York Rock Exchange which brought fans to the same side of the table as the bands and artists they love by enabling ownership experiences at a new level. For the past three years, Jeff and I have been chomping at the bit for the JOBS Act to be put into action so we could bring Legion M to life. For the first time in history, we can now offer fans a true ownership stake in the future of entertainment. We are giving fans insider access to Hollywood, not just financially, but emotionally. Fans supporting creators to create amazing content is a supernatural proposition for the fans, the creators, and the industry as a whole.

PPLA: What’s your mission and how do you think your work will effect the entertainment industry for the better?

PS: We want to open the gates to Hollywood. Our goals are simple…to empower creators to push the boundaries and empower fans to be a part of the content they love. We truly believe this is transcendent, not just for fans, but also for creators and the entire entertainment industry. Let’s face it – Hollywood is a very “hit driven” industry and with all the consolidation we have seen, the industry as a whole has gotten a lot more conservative. This is why many of the biggest new projects aren’t new at all, but retreads of existing franchises that have already proven market success. Without Legion M, there is no way to activate a fan base for something new until after the production is done and the budget spent. We know Legion M can improve the probability of creating a hit show or movie and therefore allowing more opportunities to create new franchises.

PPLA: So what exactly with Legion M give fans/owners access to?

PS: With Legion M, Fans get involved, go behind the scenes, and get first ever access. Being a shareholder means being involved. There will be authenticated access to an entire experience, including live streams from the sets, conference calls with the celebrity talent or directors, polls and votes for specific topics that the creators want input on, not to mention awesome shareholder parties at Comic Con.

PPLA: How did Seth Green and other backers get involved and what are their roles?

PS: Seth and I met seven years ago when we were both travelling on vacation and just randomly bumped into each other, where we had a brief moment of interchange. It wasn’t until seven years later that I was reintroduced to him and the team at Stoopid Buddy Stoodios. I visited their studio and was talking to them about their long term plans and fell in love with their creativity. There was an immediate melding of the minds and they were the first in line to be involved with our innovative new concept. In fact, we are finding a lot of top tier talent is very receptive to what we are offering, and we’re finding ourselves in front of some pretty heavy hitters these days.

PPLA: Can you explain what the Jobs Act is and why crowdfunding is now entering the world of Hollywood content creation?

PS: The JOBS Act was an act of Congress called Jumpstart our Business Startups. It was set up to enable better access for companies and entrepreneurs to capital and to allow regular investors the opportunities to participate in early stage growth.

PPLA: Can anyone invest and become part of Legion M? What’s the minimum investment amount?

PS: Absolutely. This is the breakthrough, because of the JOBS Act, for the first time in history; this opportunity is available to everyone, not just the top 3% like in the past. Regarding the minimum, unlike a lot of Wall Street companies, we are genuinely looking for a legion of investors and we want a broad range of fans. We will be announcing the minimum later this summer, but we expect it to be between $100 to $200. This will allow us to make the Legion as large as possible. We are also considering setting a maximum number of shares people can buy, as we really want these share to be available for the fans.

PPLA: What are some of the benefits and perks of being an investor/owner of Legion M?

PS: Our Fans/shareholders should be measuring Legion M by what we call “Total ROI”, which is a combination of financial ROI – (growth in share price) plus the emotional ROI which is the measure of engagement and entertainment you get by being involved in the process. We are confident that as we grow the Legion and create successful content, we can grow the share price, but our point of differentiation is our fan/shareholder engagement. To support this, we are building a platform for managing engagement and access, only for shareholders, to things like behind the scenes footage, conference calls with the talent and directors from the projects that we’re working on and so on. We want to engage Fans throughout the process and we have learned that creators want that as well. It’s a win-win situation.

PPLA: Are there any television or movie projects in the works for your studio? Any details you can share with us?

PS: We are busy evaluating several colossally cool projects to get behind. Details are still hush hush at the moment, but below are some hints that we can share!

• An enlightened virtual reality experience from a proven creative team

That’s all I can say right now 😉 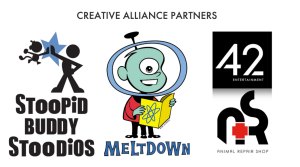 Stay tuned on the slate of projects and how to get involved with Legion M.

They aren’t accepting funding just yet, but you can Reserve a Spot today to be sure you don’t miss out on all the fun!