Everclear Rocks the Block in Joliet on Summerland Tour

On a very hot June Saturday, Joliet had a very cool time.

Everclear frontman Art Alexakis’s Summerland tour joined forces with the city’s first-ever “Rock the Block” street festival that was put together (amongst others) by local venue The Forge and offered patrons a day-long slate of music. Beginning at 11 am with a succession of local acts and cover bands, the day was anchored by Summerland’s 90’s-centric lineup of Local H (who also hails originally from Zion, IL), Marcy Playground (the “Sex and Candy” band), and Everclear. This is the 6th year of the tour, with 27 stops across the country this Summer; Joliet being the 4th night of a six-night Midwestern run.

Art himself kicked things off in the evening with a DJ set spinning classic 90’s rock hits – but not the full planned “Boys of Summerland” concept due to a mishap with the TSA – and the 90’s rock hits continued over the PA between bands. The crowd was into it from start to finish, some observing the proceedings from the upper floors of a nearby parking deck, many “pogoing” in place when “Smells Like Teen Spirit” came on over the PA. Art has styled himself as a bit of a curator of the 90’s, hosting his own show on SiriusXM’s 90’s rock-oriented “Lithium” channel on Sundays 5 pm to 11 pm and his annual Summerland tour is an extension of that. 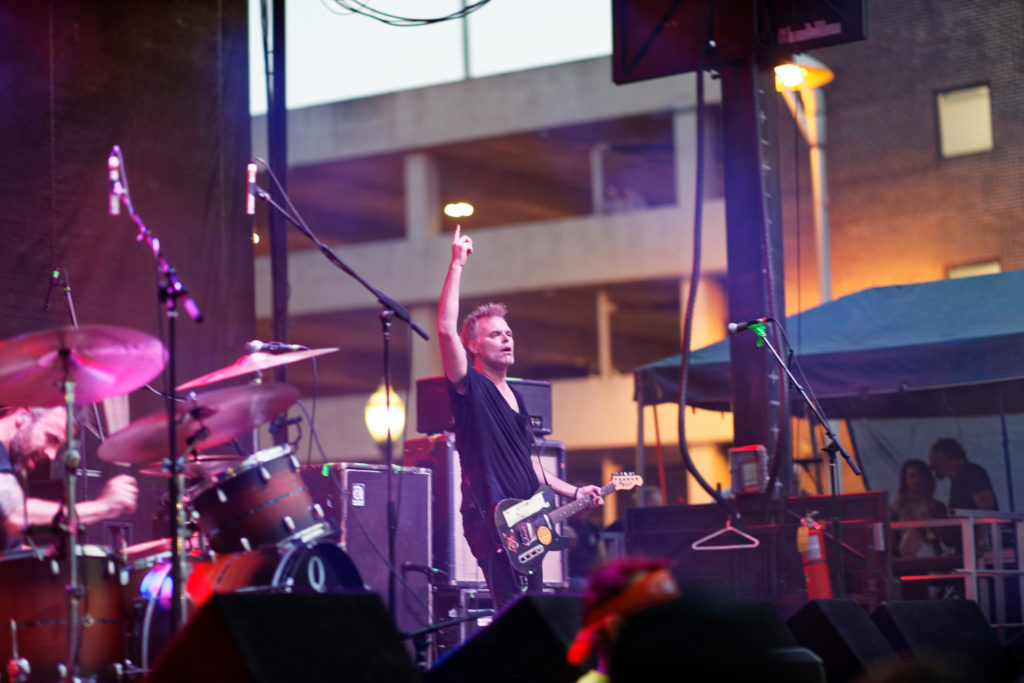 Local H started things off the way Local H always does: Non-stop heavy rock hits. Many fans from “back in the day” would be familiar with their hits “Bound for the Floor” (aka “the copacetic song”), “Eddie Vedder”, and “Fritz’s Corner”, but much of the crowd (including one security guard I spoke with) was astounded by the ferocity of their set from front-to-back, despite having to be squeezed into a 45-minute block of time. They featured selections from their entire career which spans over 25 years, opening with a cut from their latest studio album “Hey Killer,” the first featuring 3rd drummer and new fan favorite Ryan Harding. Of particular note was a collaborative approach to “Hands on the Bible” from their 2002 album “Here Comes the Zoo,” which featured the addition of the drummers from both of the other bands for an intensified effect.

Marcy Playground was next. I will admit to (and think I can speak for most of the audience for) not being terribly familiar with their catalog beyond the aforementioned hit, but their energetic and melodic pop-rock set won over a lot of converts. A surprise lineup change resulted in Everclear’s bassist Freddy Herrera standing in as Marcy Playground’s bassist as well, for reasons unstated. “Sex and Candy” was featured in the second half of their 50-minute set, but not the end, and resulted in the biggest sing-a-long moment to that point.

Everclear was the headliner and showed their fans they were happy to be there, bouncing across the stage from the opening moments of their set which kicked off with “So Much for the Afterglow.” The crowd was enthusiastic in return and was treated to all the band’s hits, including “Santa Monica,” “Father of Mine,” and “Everything to Everyone” in a set running over an hour. There were many sing-a-long moments interspersed, culminating with a surprise cover of The Vaselines’ “Molly’s Lips,” done in the style of one of Nirvana (a favorite of Art’s) to close the set with Ryan from Local H returning the favor from earlier and sitting in on drums. The Everclear closer was a fitting end to a rockin’ day.