If you are a thrill-seeking adventure junkie, or someone who rather watch others in the search of vivid near-death experiences, then make your way to the movie theatre to see Everest IMAX in 3D. We had the chance to see it in advance and talk to the cast including stars Josh Brolin, Jake Gyllenhaal and more! 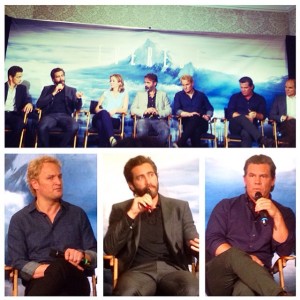 For almost a century, adventures across the globe have sought to bring deeper meaning to their lives by attempting to summit the highest point – and most dangerous place – on earth: Mount Everest.  Inspired by the incredible events surrounding an attempt in 1996 to reach the summit of the world’s highest mountain, Everest shows the awe-inspiring journey of two different expeditions challenged beyond their limits by one of the fiercest blizzards ever encountered by mankind. The climbers face nearly impossible obstacles, as a lifelong obsession becomes a monumental struggle for survival.

This adrenaline-fueled film is both frame-worthy and spectacular. The visual effects are stunning and make you feel like you are right there with the climbers. The action-adventure was shot at high elevation on the trek to Everest in Nepal, in the Italian Alps and at Cinecitta Studios in Rome and Pinewood Studios in the United Kingdom. This epic adventure that will take your breath away stars an array of international talent, led by Jason Clarke, Josh Brolin, John Hawkes, Robin Wright, Michael Kelly, Sam Worthington, Keira Knightley, Emily Watson, Jake Gyllenhaal and directed by Baltasar Kormakur.

Gyllenhaal revealed, “I love the book and I was aware of the situation of what happened in reality. But, to me what was so moving was the idea of the inevitable in a movie, which felt like reality to me in a massive entertaining movie where Mother Nature wins. In the end, the inevitable happens.” Jake added, “Balt [Baltasar Kormakur] promised us that we were going to be in the element, that we were gonna make a movie where we would legitimately be cold and legitimately be scared. I think that’s fun for someone like me, and I speak for almost all of us I think, when I say that’s what we’re looking for, something that’s reflective of something we get to learn about our lives as well to do the work that we love.”

Brolin also commented,  “I knew the story. I knew the book.  I had a massive reaction to the book.  Also, before I had met Balt [Baltasar Kormakur], I had a director come over to my office and sell a film to me and said ‘We’re going to do a film and it’s not going to be any of that Hollywood BULLSHIT. It’s gonna be real. “ The 47-year-old went on to say that, “Baltasar came to a meeting after that, and I thought, oh I need to work with this guy because it was real, it was him and he was 100% organic… I needed to work with him. ”  As for the film itself he stated, “We aren’t even going to get 1% of what really happened. We will never understand. But, we can respectfully honor this incredible story in any possible way through what we do. That’s the intention.

Later on, Gyllenhaal poked fun about Brolin in the 1985 movie The Goonies. Who knew the SouthPaw star was such a Goonies fan? Gyllenhaal said, “I second that” when speaking about The Goonies being one of his favorite movies of all time. The 34-year-old actor jokes with Brolin and asks, “Why didn’t you wear the red bandana in this movie?” He also made reference about Brolin’s character Brand, wearing shorts. The No Country for Old Men star chuckled and answered, “It was a fucking good choice.”

While appearing on The Tonight Show with Jimmy Fallon in 2014 and asked if he would be interested in returning to the role after all these years, Brolin replied, “I would do it in a second. Of course, I would do it.” Who knows, maybe there will be a modern day sequel someday!

Experience Everest in IMAX 3D first on September 18, 2015 or everywhere on September 25, 2015 in Real D 3D and IMAX 3D. To see the movie trailer visit www.everestmovie.com.

Please join Universal Pictures and the filmmakers of Everest in supporting earthquake relief in Nepal. To learn more, visit www.oxfamamerica.org and consider a donation.