EVERYONE WAS A FAN AT FLEETWOOD MAC FEST

Last night The Fonda Theatre  in Hollywood was filled with nothing but love for Fleetwood Mac at the very first annual festival dedicated to the classic rock band.

It is a shame that no one from the band was actually on hand for the event because it was hard not to be moved by the amount of love that was shown both on and off the stage. Led by The Cabin Down Below Band a plethora of musicians and actors came out to honor the legacy left by the band. 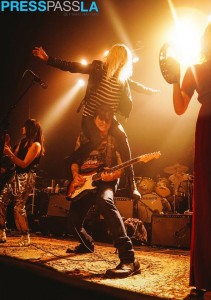 Imagine the entire night like a mix tape of nothing but Fleetwood Mac covers. Each song is done by a new artist that puts their own unique take on the piece. In the wrong hands the results could be disastrous. Thankfully there was just the right balance of fast and slow, classics and B-sides to create the perfect mood.

Each song brought out a new surprise and a new guest. Strangely, it was the non-musicians that really shone the brightest. Danny Masterson of That 70s Show took the stage with Bijou Phillips and his Men at Work co-star Adam Busch and tore through a riveting version of “Second Hand News.” Though Masterson is a well-known DJ both Phillips and Busch come off as natural born singers and could totally carry a band on their own.

Juliette Lewis went full on Mick Jagger in a one piece yellow jumpsuit dancing all over the stage and bringing up the energy of the entire room. Safe to say she was a tough act to follow. Taking the opposite route was Will Forte who openly admitted that he hadn’t rehearsed his song at all. He still managed to tear the roof off with his song, beer in hand.

The only real downside was many of the bands did not deviate from the original structure of the song. This would have been an excellent opportunity to draw outside the lines and use the talent involved to create something new and unique out of now classic songs. Instead much of the night was merely replication by famous artists. 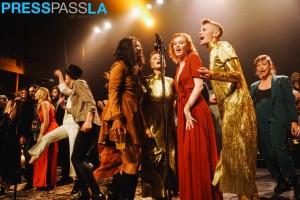 With almost manic energy the night catapulted forward finally ending with an epic Saturday Night Live-style singe-a-long where the entire roster came on stage and just let loose. It is moments like that which make rock and roll great. Many of the artists there grew up with Fleetwood Mac so allowing them to show their appreciation and just have fun for a night is a real treat to see.

If you missed there’s no need to worry .Bes Fest is known for putting on similar shows throughout the year as a tribute to the great classic rock artists of yesteryear.