“Our Kind of Traitor” is exactly what the doctor ordered for a summer thriller! This suspenseful nail-biter is just what audiences all across the world are in need of. It isn’t scary, but by no means is it a fluffy, feel good tale either.

I would compare the anxiety and unease I felt while watching the movie to when I watched “Taken” for the first time …, which means a hot mess! It’s definitely action packed and leaves you saying, “WTF,” which happens to be one of the main characters’ favorite lines.

“Our Kind of Traitor” follows the lives of married couple Perry (Ewan McGregor) and Gail (Naomie Harris) while they travel to Russia in an attempt to repair their marriage after Perry has an affair. During one of their final nights in Marrakech, Morocco, Perry and Gail try to have a nice romantic dinner, but are interrupted by Gail’s work, and a boisterous and rowdy crowd of Russian men. This is where Perry meets Dima, (Stellan Skarsgard), a Russian kingpin money launderer for the Russian mafia, and where Perry and Gail’s lives take a turn for the better and worse. The British couple is catapulted into the dangerous world of international espionage and dirty politics, as well as, the Russian Mafia. I absolutely loved ‘OKOT’ and was completely locked into the movie from the beginning. The opening scene immediately puts you in a state of unease and tension radiates off of the screen.

While it was mainly a serious thriller, there was also some underlying dark humor, which I really appreciated. Most of the humor came from Skarsgard’s character, Dima. The delivery of his laughable lines, “What the f***,” was subtle, but impeccably done. It was much needed since the movie puts you on the edge of your seat. Skarsgard played a trustworthy and lovable villain, which is hard to believe because he’s a bad guy, but isn’t that how a lot of Mafioso’s are? The only thing that distracted me about his character was his lack of a Russian accent. I heard a British and a slight Scottish accent from him throughout the movie, so his Russian persona was a bit unbelievable to me. 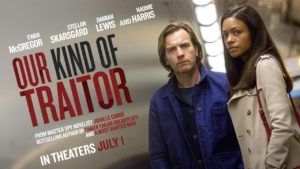 Ewan McGregor’s character, Perry, was pretty flat. I mean flat in the sense that his character was not crazy complex to bring to life. He plays a professor who cheats on his wife with a student, and is desperately trying to rekindle their marriage. McGregor’s character grows a bit throughout the movie from a shy, quiet, “keep to himself” type of person, to a man who makes a complete stranger’s family and dirty business his own. Perry is very honorable in that sense and in many ways this helps fix his own life with Gail.

I would give “Our Kind of Traitor” 3.5 stars out of 5. I would’ve liked to see more growth, connection and on-camera chemistry between McGregor and Harris’ characters. The audience gets tiny bits of their backstory, but it never fully evolves and I found myself wanting more. Also, the ending throws you for a big loop and leaves your imagination to finish putting together the convoluted puzzle that is “Our Kind of Traitor.” I highly recommend people go see it when it hits theaters on July 1st.