Understandably enough, any large scale Hollywood make of a Biblical epic always seems to be a controversial topic of interest among audiences. Exodus: Gods And Kings, is no exception.

The film is based on the story of Moses, located in the second book of the Bible (which of course, happens to be called, Exodus). The interesting tale is one that follows a Hebrew man, who against all odds, escaped a death sentence against all baby boys the year of his birth and grew up in the Egyptian palace with Pharaoh and his family. Let’s not forget to mention that the Hebrews are, and have been, slaves in Egypt for the past four hundred years at this point in history.

After his humble and estranged beginnings, Moses discovers the truth of his heritage, only to be exiled by his own adopted brother, Ramesses, fresh to the position of Pharaoh. During his treacherous walk in exile, Moses stumbles into a town called, Midian, where he is welcomed and is settled there for nine years. Meanwhile, things in Egypt only get worse between the unjust ruling of Pharaoh, and the Hebrew slaves working day and night.

The rest of the story follows Moses as he reluctantly journeys back to Egypt at the request of God, to free his people. Those familiar with the story can also recall each of the plagues struck against the people of Egypt, and all the little details that bring together an excellent idea for a Hollywood take on it.

Like I had said before, Biblical epics are often a point of controversial discussion for the general audience. Two of the most prominent reasons this is are : You’ve got the fact that many people go to see it not just for entertainment’s sake, but to also see how accurate the storyline is in comparison to the actual Bible story itself. And secondly, you’ve got those who also go to judge the material itself to see if the movie is good quality. Two seemingly simple things to do when watching a movie like this, however they actually become two very difficult things to do at the same time, properly and effectively.

So let me get this off my chest. I think we all know that Hollywood often likes to blur the lines of these Biblical depictions, often for the sake of developing for an appealing plot, or to open the doors for cool visual stints and effects. This was definitely the case in Noah, which starred Russell Crowe, also released earlier this year. All things considered, I was fairly pleased with the accuracy Scott maintained in directing this film. Of course, a few details were missed out on, and a few of the used details were expanded on, however all in all I was impressed by the attempt to create a film that very much mimicked its story on page.

While I am thankful that many of the Biblical details were included, the plot seemed to be a bit oddly paced to me. It would have been more effective to have extended the scenes in which Egypt is plagued by God, as opposed to the longer beginning it had, drawing out Moses’ life in Egypt. Because of this, the movie itself didn’t quite live up to the potential it could have had.

Christian Bale (Moses) gave a very emotional performance, and did a very good job of displaying the hero in a cracked way. I use that word only because the way he portrayed Moses very much reminded me that against some belief, Moses was not a perfect person by any means. He had doubts, he had moments of broken faith, and I was pleased with Bale’s interpretation of him. 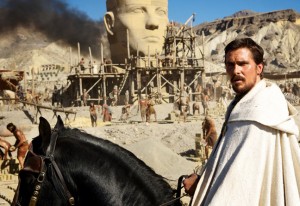 I would have liked to see more of a developed relationship between Moses and Ramesses however, that way the split of Moses being Hebrew would have been a bit more, dare I say it, dramatic. Especially since the long beginning portion of the film where Moses’ character was set up as this Egyptian prince, there could have been time for that relationship to be more than it what it was. Many of the relationships within this film seemed to have suffered a bit, with little to no development at all.

Despite it’s lacking in development, it should still be commended for its visual effects. The film still contains its interesting roots, and is most definitely worth a watch. Especially if you love a good Biblical epic, and a good Christian Bale movie.