“Failure: A Love Story” Is Entertaining, Though Hardly Thought Provoking

On Sunday night, the Kirk Douglas Theatre welcomed the Coeurage  Theatre Company production of “Failure: A Love Story”. Written by Philip Dawkins, the one-act play is the first of three in Center Theatre Group’s “Block Party”, a celebration of the LA theater scene.

Set in the backdrop of 1920s Chicago, “Failure” tells the story of the three Fail sisters: Gertrude, Jenny June, and Nelly. The orphaned Fails own a clock repair shop, above which their adoptive brother, John N. Fail, operates a veterinary clinic. Their world is turned completely upside down when a dashing young suitor by the name of Mortimer Mortimer stumbles into the shop and shares a tender moment with one of the sisters. Over the course of the play Mortimer comes to fall in love with each of the sisters. 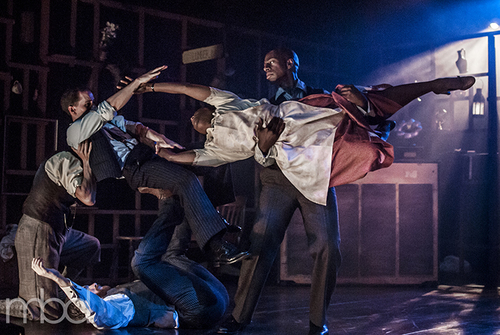 While all the show’s leads gave exceptional performances, the ensemble was the true standout. Never leaving the stage, the immensely talented ensemble used both verbal and body language to narrate the story of the Fails in the vain of a Greek Chorus. While the cast is terrific in delivering the story, the story itself seems a tad lackluster and pointless. There is no real moral or lesson to the story, just a humorous representation of the lives of the Fail Family and how each of them tragically met their end.

If you’re planning on having an evening that will make you think, this isn’t the show for you. However if you’re looking for a solid night of entertainment coupled with some toe-tapping musical numbers, “Failure: A Love Story” is not to be missed. “Failure: A Love Story” continues through April 23. Tickets can be purchased at centertheatregroup.org.