Fantastic Beasts and Where to Find Them is a wonderful and wondrous extension of the Harry Potter universe. Written by J.K. Rowling and directed by veteran Potter director David Yates the film keeps the style and tone of the previous films while still managing to take the audience in a brand new direction.

The film is a great way to introduce both children and adults to the Potter universe in a far less jarring way than a tour of Hogwarts might. By moving the action to New York and bringing in brand new characters, very few of which have any connection to the Harry’s life, it is a great introduction for outsiders to the franchise.

The story follows Newt (Eddie Redmayne) a zookeeper of sorts for magical creatures who travels the world finding and protecting them. The year is 1926 and American wizarding community is on edge as a second Salem Witch Trials seems to be about to start. Led by Mary Lou (Samantha Morton) the whole city is on edge as a mysterious presence is tearing up the city and leaving destruction in its wake. 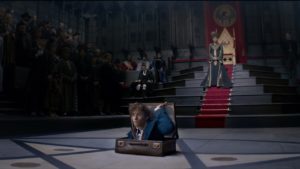 Eddie Redmayne gets into trouble as a British Wizard trying to find magical creatures in 1926 New York.

With a briefcase full of crazy creatures Newt becomes an immediate suspect and is taken in by a disgraced witch detective Tina (Katherine Waterson). But soon enough bigger trouble rears its head as the two must stay one step ahead of her police chief (Colin Farrell) who has his own agenda and the entire American wizarding community.

Unfortunately not all of it works as well as it should. This may be due to the fact that the Potter movies set the bar insanely high and following them up in almost any way will never bring back the same magic, but parts of it just didn’t feel right. Strangely most of this is due to Eddie Redmayne who seems to be having trouble acting on screen. He spends the majority of the movie mumbling his way through his lines and barely making eye contact with his fellow actors. He actually redeems himself about halfway through the movie in a truly magical scene but it’s too little too late by that time. The rest of the cast, on the other hand, fully commits and gives it their all.

That being said the world that the audience is thrown into is truly amazing. The idea of a wizard noir is fascinating and everything from the set design to the costumes look beautiful. Fantastic Beasts is actually the first in an ongoing franchise which while follow the characters on continuing adventures through the pre-Potter landscape. Whether or not they decide to stick to the same time period is uncertain but allowing the audience to watch the evolution of this universe is one that no one should miss.