WHY FOUND FOOTAGE WILL RUIN THE FANTASTIC FOUR REBOOT

Hollywood has never had the best self-control. Like an addict looking for another fix movie studios often hook onto a fad and don’t let go of it until the last drop of blood has left the format’s body. Usually it doesn’t take much to jump start the addiction, all it takes is a prophetic indie blockbuster.

In the case of found footage that blockbuster would be The Blair Witch Project way back in 1999. The indie horror film won the Guinness Book of World Records for box office ratio when it made $240.5 million on a $22,000 budget. After that the floodgates were open and the found footage craze took off. That was 15 years ago and it is safe to say the craze has ended, the studios just don’t seem to realize that yet.

Yesterday it was announced that Chronicle director Josh Trank, who managed to make one of the few truly engaging found footage films of the past few years, would be crafting his reboot of Fantastic Four in the same fashion. Time to start worrying. 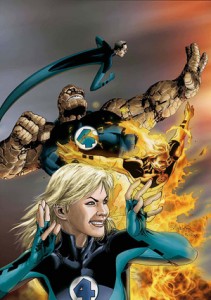 This is a clear cut case of a studio not knowing when to cut the cord and allow a director a bit more freedom. “Hey, remember that inventive thing you did? We’ll pay you tons of money to do it again but with different characters.” It is essentially typecasting for directors and the main reason why so many don’t get sucked into the studio system.

Don’t get me wrong, found footage can work but only in the proper context. Cloverfield worked well because it wasn’t just a unique way to tell the story but there was a reason for someone to be holding a camera and filming the entire time. If Fantastic Four is going to be carried by any real plot then that means that some key figure in the Marvel universe is going to be relegated to holding a camera the entire time off-screen. Exciting!

The other most damaging aspect of the genre is the fact that due to the rather scattered way found footage films are shot the audience never really gets to know the characters. There is a distinct distance felt between audience and actor that isn’t even a factor in most other movies.

The reason why modern superhero movies work is because they have finally learned to show the depth of the characters involved. This is already a reboot, reintroducing characters for the first time that audiences are going to have to love enough carry a franchise through an unknown number of sequels. If people leave the theater with no connection to the film then it isn’t doing its job.

Compare Batman Begins to Batman & Robin. The two couldn’t be more different. Batman & Robin sacrificed good writing and a cohesive story for straight-up style in an attempt to sell toys. Batman Begins held true to the source material and treated its characters and the audience with respect creating one of the best films ever made. With films like Days of Future Past, The Avengers and even Man of Steel it is clear that we are in the Golden Age of comic book movies.

Fox wants to be included on that list with Days of Future Past providing some much needed energy into its X-Men franchise. They took a creative gamble and it paid off well. Having Trank do more of the same isn’t a gamble, no matter how much they dress it up to be one.