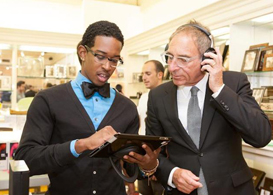 Fashion’s Night Out is the hottest ticket in fashion from coast to coast and we celebrated by attending the Ron Robinson event at his boutiques at Fred Segal on Melrose.

Ron Robinson on Melrose first opened its doors in 1978 and has been synonymous with beauty, design, and style ever since. The boutiques are a part of the Fred Segal Center (Robinson worked as a salesman, buyer, and Vice President for Fred Segal for nearly a decade before building a brand of his own). The boutiques started with men’s casual sportswear and have grown to offer hard-to-find labels including both local and international designers. The store on Melrose includes its beauty boutique APOTHIA, children’s store LIFESIZE, and home, lifestyle, and design items at StylObjects. The store has become both a destination in and of itself, and a cultural icon.

The boutiques included a variety of brands and specialty items in honor of fashion’s biggest night. RMS Beauty was in the store offering make up touch ups and tips and a free gift with purchase. I tried there highlighter around my eyes and certainly saw an extra pop! Speaking of beauty, possibly the most interesting conversation in the store surrounded the brand Azature which offers black diamond nail polish. Azature is a black diamond company (known for their black diamond bracelets, charms, and rings) and they recently launched the most expensive polish in the world made with real black diamonds. On hand at Ron Robinson’s was the $25 bottle and they were offering free manicures from celebrity stylists. They also make a bottle priced at $250k that includes one black diamond per bottle and  Press Pass LA was told that two were on hold that evening!

If your hair was feeling a bit flat, no worries! Oribe was on hand doing complimentary styling and displaying some of their favorite hair products including their Supershine and Dry Texture Spray for that second day salon look. The excitement continued with Deus Ex Machina an apparel line which happened to have Orlando Bloom’s custom Deus motorcycle on display in the store. The t-shirts would look great on anyone on the back of Bloom’s bike!

In case all the shopping struck up an appetite,Shuglove’s local and hand-crafted candy and Diabolo’s energy drink were there to refresh you! My favorite candy was the sour apple gummy bears (think apple martini) and I loved the energizing Acai berry drink to keep me going! 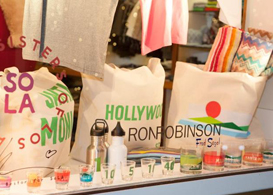 Other great clothing included Sola- Sisters of Los Angeles – which is a new brand who marked their first night in a retail store for Fashion’s Night Out at Ron Robinson’s. Nothing like making a statement! The brand was also featured in the L.A. Times earlier that day so something tells me their colorful printed home and apparel items will be a sure hit. The nice thing is the line is totally inspired by life in L.A. My favorite included a baby onesie with all the great local hiking trails like Runyon Canyon listed on the back. The night also featured tech savvy clothing like the Hoodiebuddie– hoodies whose drawstrings double as headphones. The best part is they are totally washable so you can go for a run on a cold morning, listen to your music, and do your laundry without worrying about ruining your iPod! Speaking of cool technology…Native Union introduced the Pop phone (availale in neon colors including hot pink!). The phone is a bluetooth so you can dial on your cell (leave it where you have good service) sync your Pop phone and roam around your house at your leisure. They also introduced the “Gripster” which attaches to your iPad.

What girl doesn’t love jewelry! My favorite accessory of the night included The Giving Keys which are engraved keys which help employ the homeless. They also have a pay it forward concept. When you receive a key with an engraved message, you then pass it on to someone else who needs to be given that message. Messages include inspiring words like dream, courage, strength; they were hand-stamping custom keys specially for Ron Robinson customers on Fashion’s Night Out.

The highlight of my evening was when Ron Robinson picked out his favorite gift item in the store- a vintage jewelry cuff that had once been a shoe buckle! It was absolutely stunning on my wrist and I saw a perfect vintage clutch to match. Christmas wish list, here I come!

Check out our video of all the great brands and the party at Ron Robinson’s at Fashion’s Night Out.