It was FAST. It was FURIOUS. It was FIERCE. This ride is a mind-blowing experience! Universal Studios Hollywood breaks new ground in themed entertainment with the landmark introduction of this dynamic hydraulic motion-based thrill ride Fast & Furious -Supercharged.

This ride takes you on a high-speed chase through the streets with your favorite cast members, Vin Diesel (Dominic “Dom” Toretto), Dwayne Johnson (Hobbs), Michelle Rodriguez (Letty Ortiz), Tyrese Gibson (Roman Pearce) and Luke Evans (Owen Shaw). It’s designed to catapult guests into the high-stakes underground world of fast cars in a harrowing escapade—at perceived speeds in excess of 120 miles per hour—to save one of their own from an international crime cartel.

I got to speak with Chick Russell, COO and Executive Producer of the “Fast & Furious – Supercharged” ride. Here’s what he had to say:

PPLA: Where did the idea start to turn the film franchise into a ride?

PPLA: What can you tell us about the ride?

CR: The films themselves are almost like a thrill ride. So we thought why don’t we take some of the action and the characters and let the guests feel what it’s like to be in a “Fast & Furious” film. So that’s what we did. We developed a number of technologies that makes it look like the actors are really right in front of you. Other technology that makes you feel like you are racing through the streets of LA. Other technologies where it makes you feel like the tram is air-born jumping a river at the end. So it’s a thrill ride like you have never seen before. We have a scene where Tyrese Gibson (Roman Pearce) and Michelle Rodriguez (Letty Ortiz) pull up along side the tram because it’s not going fast enough to get away from Luke Evans (Owen Shaw). So they throw a hook to start pulling the tram through the streets of LA at 120 miles per hour. Just enough to make you believe you are racing through the streets.

PPLA: Did you collaborate with the filmmakers to get this ride as close to the film as possible?

CR: Yes, we work with the film makers and together we sit down and we say ‘ok what can we do that’s different from the film and in some way adds new excitement to the film. Also, find ways to feel what its like, rather than just watching a film. ‘ You are actually being moved, you are feeling the wind, you got smoke, you got water hitting you, it’s very visceral that way. That’s what we do here and its’ a thrill ride you are never going to forget.

PPLA: Are all the cast members going to appear in it?

CR: Absolutely. And what’s really cool is they appear in a very unique way at one point. We have a real set, a dimensional set, and we figured a way to let it look like the actors are really present walking on that set. So it’s going to be really cool for fans of the film series to see their heroes right there very close to them.

PPLA: I have to ask, will Paul Walker make an appearance?

CR: No, unfortunately we started this after Paul’s death. So we weren’t able to use him. But, he is there in spirit and will always be part of the family. Vin Diesel was so collaborative and so excited about our process and he knew this was a way to extend the fast family and let them actually join in the fun with him and feel what it’s like to be in one of these films. 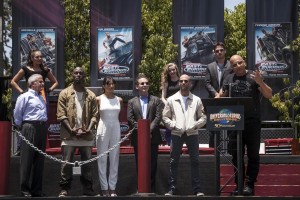 When I spoke to Vin Diesel about the ride, he told me “I’m about to feel it first hand right now and I’m NERVOUS!!!” So if Vin is nervous, you know this has got to be good!!! The ride opens June 24, 2015 as the grand finale of the theme park’s signature behind-the-scenes Studio Tour. So buckle up, hang on tight and enjoy the RIDE!