This Wednesday night Fathom Events is taking their advanced movie screening to the next level. In honor of the upcoming premiere of Oliver Stone’s new film Snowden the company is invited audiences to not only see the film a few days early but sit in on a special Q&A between director Oliver Stone and Edward Snowden himself.

This is a big deal for quite a number of reasons. Not only will we gain insight into how the movie was made but audiences will get a first-hand account of why the content is important. Snowden is a 30-year-old whistleblower and former NSA contractor. He left his home in Hawaii in May 2013, travelling to Hong Kong to leak documents to journalist Glenn Greenwald. At the time of his departure from the US, Snowden worked as a Booz Allen Hamilton systems analyst doing contract work for the NSA. The documents he revealed detailed secret NSA programs and capabilities that have been and continue to be used to collect and store personal communications both within the US and abroad. 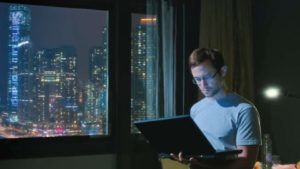 Snowden’s revelations of secret mass surveillance by the NSA and its national security-sector contractors have greatly embarrassed the US government. Attempts to extradite him to stand trial in the United States come against a background of systemic over-classification of information, increasing secrecy in the courts and a harsh crackdown on national security journalism, centered around investigations of unauthorized leaks. The Obama administration has prosecuted more people under the Espionage Act for leaks to the press than all previous administrations combined.

Needless to say, Snowden will not be able to make it out to the premiere of his own film. That is why the Fathom Events event on September 14 is such a unique opportunity for audience members to get to know the man behind the headlines up close and personal in a way that the film itself cannot even do. For many it is a once in a lifetime experience and chance to get to know one of the most intriguing figures of the 21st century.

To get tickets for yourself go to www.fathomevents.com.