Your favorite Jurassic Park Ride is coming to a close!

Don’t miss out on your final days to ride the classic Jurassic Park ride as Universal Studios prepares to create a new adventure. 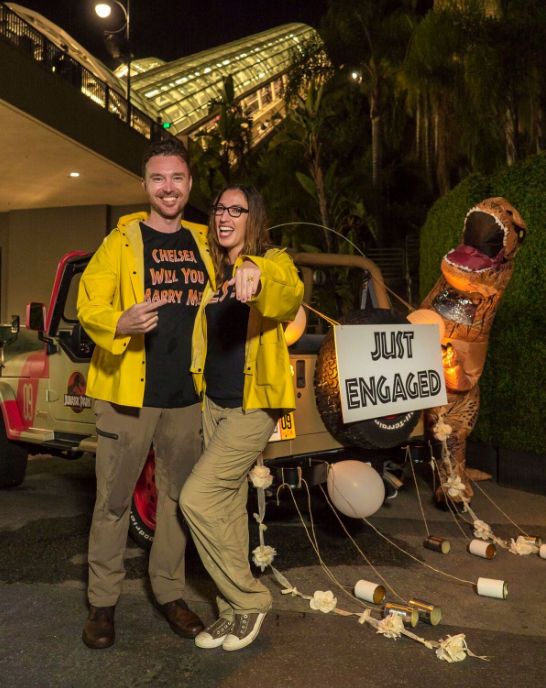 One couple broke the record on most rides in Jurassic Park. They went on to one up it neatly into legend by an unbeatable proposal! Talk about a one of a kind engagement!

Chelsea and Devin are local LA residents and Universal Studios Hollywood annual pass holders who have made it a tradition to come to the park and ride Jurassic Park – The Ride every year for Chelsea’s birthday with a raft to themselves which was a tradition started by Devin many years ago. They were inspired to break the record once they heard about the ride closing on September 3rd to make way for the new Jurassic World ride in 2019. The previous unofficial record was two best friends who rode 60 rides in a row in 2015. Chelsea and Devin rode an official 62 times on Tuesday July 17th, 2018 for 13 hours with just enough break time for a quick lunch and few trips to the bathroom.

The engagement ring was a custom made mosquito amber ring inspired by the amber rocks from the Jurassic Park film franchise. The Barbasol can was a porotype officially licensed screen accurate prop replica donated by Universal Pictures for the proposal manufactured by Chronicle Collectibles and will be available for sale in the future. They were so excited to break the record that the weekend before the attempt, they adopted a kitten and named him Dodgson while binge watching the Jurassic Park franchise trilogy.