ARE YOUR FAVORITE SHOWS HERE TO STAY? 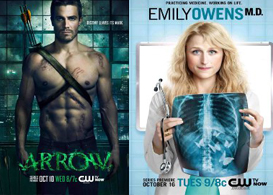 We are coming upon that time when networks have to decide what shows stay or go. With mid-season replacements gearing up to take over, which of your favorite shows will be returning and which will be saying bon voyage for more than just winter break. Take a look at our early predictions.

NBC– has at least four dramas waiting in the wings- Do No Harm,Hannibal, Deception, and Smash. It means things like the returningUp All Night and new Guys with Kids and Chicago Fire who have had less than stellar ratings might be on the chopping block. Even longtime Law & Order: SVU could be find itself joining the ranks of already cancelled Animal Practice. Shows that seem in the clear to return include Parenthood, The New Normal, Go On, Grimm, Parks & Recreation, and Revolution.  We will be saying goodbye to The Office and 30 Rock, both in their last season which leaves some leeway for shows teetering to get renewed.

FOX– Fringe is in its final season and The Mob Doctor has already taken a hit (pun intended). With two shows down it looks like Ben and Kate could be next up for a cancellation despite its early order of a full season. Shows that seem in the clear include returning hits New Girl, Glee, Bones, and Raising Hope with renewals already in for established series likeFamily Guy, The Simpsons, and American Dad. The Mindy Project, a personal favorite, and though not a home run, seems to be picking up speed and likely to see a second season.

CW– It’s time to say goodbye to Gossip Girl which is in its final season and its cousin 90210 could be going the same way. Lower ratings would at least suggest next season could be its last. New show Beauty and the Beast is likely to be cancelled while longtime supernatural love Vampire Diaries and well, Supernatural, seem both to be stronger than ever. Newbie Arrow seems to be a bullseye while Emily Owens, M.D. is fairing a bit under the weather. The doc from Dixie (Hart of Dixie) also finds herself on the operating table. Let’s see who has a pulse come spring.

CBS– Despite being  a Jersey girl myself, I only needed one episode to know that Made in Jersey was not likely to bring inJersey Shore sized ratings. I was not surprised to see its immediate cancellation and something tells me Partners is soon to follow. CBS does have a long list of sure things with How I Met Your Mother, Two Broke Girls, and Big Bang Theorycontinuing to bring the laughs and Criminal Minds, Blue Bloods, and Persons of Interest bringing the heat. It also has an even bigger list of shows on the cuff including some of my personal favorites like previous hits The Good Wife and The Mentalist and new shows Vegas and Elementary. Even more surprising is Hawaii Five-O beating out contenders CSI &CSI: NY in the detective game. Only time will tell who gets the boot to make room for CBS’s new drama slate next year.

ABC– With the departure of Kate Walsh, it seemed almost inevitable that Private Practice would meet its demise, though I had hoped it would find its way to come back from huge character losses as its sister Shonda show Grey’s has done time and time again. That said, Grey’s Anatomy is a sure thing along with Modern Family, Once Upon a Time, Revenge(woohoo!), and Suburgatory. Other shows very likely to stick around are Happy Endings,The Middle, and one of my favorite shows on TV, Castle.  New shows 666 Park Avenue and Last Resort are most likely to go along with lacklusterNashville and The Neighbors. Two shows that could seriously go either way are my newest guilty pleasure, Scandal (let’s save this one!), and quirky comedy  Don’t Trust The B in Apt 23.