FEVAMODE WANTS TO GET YOU NAKED 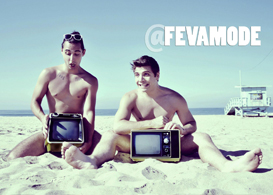 PPLA recently caught up with Indie Pop Duo FevaMode to talk about the release of their new album Born To Be Loud and catchy single “Just To Get You (Naked)”. We sat down with brothers Casey “Case Feva” and Michael “Mick Mode”Sullivan to talk about their fun, playful sound. Any band that is ballsy enough (no pun intended) to title their track “Just to Get You (Naked)” and then pose nude on the beach has got to be worth a look and listen!

Don’t be fooled by their youthful presence, Fevamode can hold their own onstage and has already played popular LA venues including the House of Blues Sunset and The Viper Room. In fact, their onstage artistry has been compared to more established artists like Maroon 5, Foster the People, and LMFAO.

We caught up with this duo just in time for the release of their new work. Enjoy our ‘Take Five’ with Fevamode:
PPLA: When did you know you wanted to pursue music?

FEVAMODE: When we were kids, our mom blocked MTV from our television because she thought it was too explicit. The only time we could sneak and watch it was after school at our Grandmother’s house. It was so intriguing cause the videos were so cool and we felt like we were doing something we weren’t supposed to do, which is always better than being well behaved. I was so attracted to these bands and became so intrigued by music videos and these eccentric performers. Little did I know, it was the driving factor to start playing drums and starting a band at twelve years old! It’s funny looking back because me and Feva became really serious about pursuing a music career right when we started playing instruments. Our weekends became ‘we’re having band practice and playing a show’, yet we were young teenage kids who had never stepped on a stage in our lives. Over the ten years of playing various venues, recording five full length records, and five Ep’s, it’s really become second nature to us to pursue music and perform full time, everyday.

PPLA: Is this your first album? I know you were once signed to a label, what has been your career path to get you to this point?

FEVAMODE: As FevaMode, yes, this is our first album. Born To Be Loud is the name and it’s our proudest work to date. I’m beyond excited for the world to hear this album. Before we got to this point, we recorded various records and EPs, mostly independent stuff we paid for with our own money. We would sell CD’s at shows with artwork that I photoshopped or just burn sampler CD’s and give them away. It was very DIY makeshift stuff, but we always felt we had to leave the fans with something tangible to bring home and remember us by. As far as how we got to where we are now… when we moved to LA in 2009, we worked with an independent label and recorded a full length record. As we got closer to the release almost two years later, it was apparent they didn’t have the right promotional plan to support the launch we needed. Long story short, we shelved the album, split from that label, and moved on. On the bright side, in that time we had the opportunity to write for other artists, which was new for us and led us to starting our own music production team, FXMS Music. Currently we’ve written for eight artists other than ourselves and we continue to produce and write songs for four artists within our company.

PPLA: How do you feel about being out as an indie artist now? Where do you see your career going?

FEVAMODE: Fifteen years ago nobody knew Napster would kickstart free file sharing and change the industry the way it did, just ask Lars Ulrich! It’s become the day and age of social media and YouTubers getting overnight success. Some say it’s not the ‘true’ way of developing artists anymore, but I say ‘if you can’t beat em, join em’. Maybe we should change that to ‘if you can’t tweet em, join em’. Ok, bad joke. Truthfully, it’s just different now and I think artists are more reachable more so than ever with Facebook, Twitter, and apps like Instagram. Now you can follow, even get responses from your favorite artists and ‘like’ and comment on their everyday photos they take. It’s unreal! Growing up, I only knew the bands from the inside of CD liner notes and the occasional TV special. If you can adapt to the new way of the industry, it’s a great time to be an independent artist. For FevaMode, I see a long career ahead of us, full of world tours, explosive albums, epic music videos, all tied together with unique social media tactics to keep our fans truly interested in what we’re doing. After all, we’re just a push of the button away aren’t we?

PPLA: What is your dream band to play with? Dream venue?

FEVAMODE: If we got to play with Blink 182 that would be a dream come true. They really inspired us in the early years. You can thank them for the punk roots and the fun attitude you get from us. I’m always a fan of people who don’t take themselves too seriously, and in real life we’re such goofs. I think naturally we gravitate to bands like Blink 182 and LMFAO because they’re entertaining and at the end of the day go, we all want to go party with these guys! Dream venue would have to be Wembley Stadium or Central Park. Play any of those, and you know you’ve made it.

PPLA: What inspired your video track “Just to Get You (Naked)”? What inspires your music in general?

FEVAMODE: “Just to Get You (Naked)” was one of the first songs we worked on for this record. I was hanging with Casey one morning and he said, “I have this idea for a hook, it’s kind of weird” and he picks up a guitar and starts singing “It was just to get you naked…” At this point I remember not all the lyrics were written and we started humming little melodies and vibing off each other and I said, “Can we write to this right now?” Literally thirty minutes later the song was done. This one was unusually quick and I might even say it was the pioneer that kicked off the direction of this record. It’s really quirky and fun, and the first time we dropped an F-bomb in a track so it really set the foundation of let’s make this a really fun, badass record, no holding back! Inspiration for our songs stem from so many things- life experiences, relationships, a crazy party, sometimes I’ll make up a litte story. When we get to writing, it becomes ‘Ok, what’s the main hook lyric about?’ Now let’s write the rest of this thing’. You really turn on a character when you’re in a song and I think that’s the most important thing, knowing where you’re at when you’re writing lyrics and how to say them in a way that people will understand. As long as we’re living and breathing there will be inspiration for more songs!

As for their album title Born To Be Loud the duo told Press Pass LA, “It’s to the point. It’s loud. It’s everything we’ve learned and been through summed up into a fun, edgy, pop record.”

Check out the band’s iTunes promo video for their new album. Watch the music video for “Just To Get You (Naked)”.