FILMMAKERS ‘ROCK THE BOAT’ TO SAVE THE L.A. RIVER 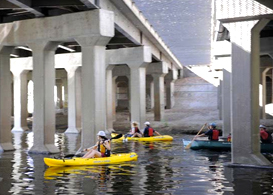 The condition of the world is taking a complete toll on ecology these days. Forget the two political parties debating, what about the equally divided sides of nature? Energy forms are being tossed at us in every type of conservation known to man. Everywhere you look, greener ways of living! But is it really doing anything? Take a look at the facts, before you buy into a hip way of saving the world, because facts are undeniable and eternally pertinent.

Facts are disclosed in the recently completed documentary Rock the Boat – a short film that examines the L.A. River. It looks at  the river’s importance to founding the city, to itʼs demotion to a channeled stream of slighted, and shall we note, polluted waste. For years now, Angelinos and outsiders miss the fact that L.A. sports a river that runs through it. Though showcased in many big movies, most famously in the race scene fromGrease, and a danger to Genevieve Bujold in Earthquake, the L.A. river tends to be forgotten, and flows along industrious establishments that prove hazardous to itʼs existence. This was a decision made to keep the river away from being halted or stopped; the river has also been channeled, again at the behest of keeping it naturally flowing. What this has done, however, is hinder the being of the riverʼs full potential, minimizing it, in areas, to an insufficient crawl that barely makes it out of the city alive. Though an environmental urgency now for years, somebody needed to go big with itʼs awareness, and thatʼs what filmmaker/activists Thea Mercouffer, and co. do, with Rock the Boat, a small documentary that aims for a big message!

Filmed on almost no budget, on a now-famous expedition (2008 L.A. River Expedition), the film chronicles the experiences of itʼs Caravan, from the channels of the city, to the run-ins with the law, and ultimately shoots for the appreciation of the River by the people. Itʼs truly a tremendous documenting of what the rapidly advancing industrial influences of the city are doing to the cityʼs natural resource, and beauty. The event was peppered with compelling and thought provoking speeches given by the personnel involved, and it looks like the filmmakers already created enough of an outcry – for there are now causes uprising to help rescue the River from itʼs current plight.

Itʼs a wonderful thought that the short film will accomplish itʼs mission, that of raising awareness for the L.A. River. Itʼs a long shot – but with the presentation given, the film is a still water that runs deep, and has a real chance at creating a ripple affect through out the city with itʼs intention.