FILTH REVIEW: SPIRAL WITH A SMILE AND CIRCLE THE DRAIN

The Truth. The reasoning and cause behind everything that makes us who we are. Fact of truth is an experience. Although it sounds like a redundancy, it is not. It is an absolute, fact of truth. It is the measured amount of existence in which we are willing to acknowledge the verity of fact, or whether we are willing to twist our reality into a perceptive untruth that we hold to with a solid veracity. It’s the philosophy of society. The balance in the unbalanced brain. Sometimes the two are the same. Most of the time though, they are not. This is the exploration central to Jon S. Baird’s adaptation of Irvine Welsh’s novel of the same name, Filth, starring James McAvoy.

We’ve all encountered it. That moment in the day when we run across someone so mean, so vile, so whole heartedly broken, that it causes us to pause and try to empathize with that person to understand what happened to them in their lives that made them the way that they are. Sometimes it’s chemical, most of the time, they’re just being dicks. If you ask that person what’s wrong, they’ll tell you that they are perfectly happy and will most likely leave you with a huge, “Mind your own f*%king business.” That’s the last glimmer of the remnants of humanity left in a person at the end of a rope just before they’re sucked into a wholly abyss.

That black, deep seeded hate that makes us do what we revile most but can’t help, that is Filth. Edinburgh, Scotland is the perfect stage for this film. With its wet, dingy, cold outward appearance, we know in every home there surely is a warm central fireplace. You just don’t get to see that in this one often. James McAvoy plays Detective Sergeant Bruce Robertson masterfully. He is completely entrenched in the abysmal heart that has remnants of those anti-heros that we so badly want to love and hate simultaneously. Only in this portrayal, you laugh with your hate and grimace with your love.

McAvoy understands the character in a way that becomes momentous in scenes where you can see the wheels turning in Bruce Robertson’s mind as he tries to sabotage everything in his life by sabotaging everyone else’s. The Sergeant Detective is a crass, perverted, racist alcoholic with a penitence in coke, slags and well, anything that can pick him up from his despair. A talented cop, but an even better manipulator, McAvoy hits on almost all cylinders with his depiction of the Detective. The only wish that went un- granted by McAvoy in this movie was the want for a little more humanity in the character’s vulnerable moments, but that could be chalked up to the director/writer’s input on McAvoy. The balls of this character comes from what he decides is real, and what he decides is not. What lies are lies, and what lies are facts.

This black hearted bastard that is Robertson is a virtuoso in his manipulations, but how masterful can one be in the end, when your diet and routine consists of blowing lines, drinking scotch, and knocking down other men’s spouses by the dozen. Oh, and in midst all of this, is a promotion being dangled in front of Bruce and his detectives by the Captain, fueled by a murder investigation that is just fodder for what is, in Bruce’s mind, a forgone conclusion of a new position. It’s enough to drive a man mad, or enough to make someone who might already be mad, destructive. The director uses this movie as a vehicle to adequately portray the human condition to lie, cheat and steal what they want in a way that shows that a stark black comedy can drive.

Jon S. Baird’s direction and writing kept the central perk of the book, and Irvine Welsh’s amazing gift, of black comedy complete in the eye of the camera and Detective Bruce Robertson. Irvine Welsh’s book plays well on screen with Jon S. Baird’s tweaks. The promotion becoming the central focus, instead of a murder investigation, in turn helping keep the story about the characters and their broken, ill faded lives rather then a whodunit with a sexual prowess and a coke problem. There are several moments in this movie where you can laugh, but when you do you feel like a giant piece of crap for doing so.

It’s astonishing in its absurdity, tragedy, and best suited for dark senses of humor. Picture comedy with the vulgarity of pornography (if you find it vulgar) and the pageantry of a circus in the middle of A Clockwork Orange while Sherlock Holmes is recited in the background. You’ll find Filth somewhere in that realm. Everything within Bruce’s world is fair game for destruction and manipulation as he cries indiscriminately, his motto before screwing someone out of their status quo, “Same rules apply.” 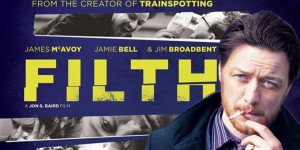 Everything is muted in tone and color. The vibrance in this film is few and far between and works well to give the audience the sense that everything and everyone in this film is broken, sucked dry of life, and flailing to find something that makes sense. The characters of Mary (aptly named in representing an innocence Bruce does not want to corrupt) and Amanda Drummond (a smart and independent coworker who challenges Robertson for his promotion) are the only ones in the movie who do not feed into any chaos offered by Bruce, although they do coral the chaos into a corner, which pushes the story.

The main insider to Bruce’s brand of anarchy is Dr. Rossi. Dr. Rossi makes sure Bruce knows he’s broken. This cross between Dr. Robotnik and the MadHatter is Bruce’s psychiatrist, but becomes part of his psyche as we determine what events shaped this Officer of darkness and the law, into the man that he is today. The film focusses on the Detective’s mental anguish as opposed to his physical ailments like in the book. So, Dr. Rossi is an actual doctor who allows the audience to piece together the beginnings of what happened to Bruce in his early life, rather than a tapeworm that names itself and is accepted as apart of his conscience like in the literature. Ultimately, Bruce finds himself circling the drain for a long while as everything unravels and he destroys an innocent man (Clifford Blades) and fumbles a murder investigation due to his inability to get out of his own way.

It all comes to a head which leaves you dangling like an ornament and asking “What the hell just happened?” This movie has balls, horrifying clashes of morality and unbelievable divisions of grief inspired laughter. The more you watch the more the nuances jump out and make you chuckle. It’s worth the watch if you enjoy the rawness of cerebral feelings and just dues. At times, it circles the drain for a little longer than needed, but still a decently done film. By the end of it, you won’t know how to feel, which at times, is the point. It will leave you confused and undetermined in acceptance, maybe even a little under minded and pissed…which in the end, is life. Same. Rules. Apply.

On iTunes April 24th, in theaters May 30th. Watch the trailer.