FINDING THE NEED FOR SPEED WITH AARON PAUL

Just 4 nights after the Oscars, Hollywood and Highland shut down once again for the Need for Speed Premiere. Fans Lined up the streets of Hollywood Boulevard to catch a glimpse of the stars of the film. Press Pass LA caught up with the Breaking Bad Golden Globe winner, Aaron Paul, to discuss his upcoming movie.

Now, Aaron Paul may have the need for speed while filming but that doesn’t mean he brings his talents from the sets to the streets. When asked “How do you get out of a speeding ticket?” Aaron quickly replied “I just don’t speed.” Director Scott Waugh approached Aaron to do his own stunts without CGI and Aaron said “I thought it was incredibly brave, and I also thought the director was out of his mind. Didn’t think he could pull it off, but he did.” And how did Mr. Breaking Bad, pull off the stunts on his own, he says “I was just on the track from morning to night.” There ya go. Work hard. Drive Faster.

“What you’re watching on screen is incredibly intense, and its incredibly viseral to watch, we follow Aaron Paul’s character and we follow what he’s feeling. It took me a while to realize he’s not Jesse Pinkman (Aaron Pauls Character in Breaking Bad). His intensity is unbelievable,” said the film’s Composer Nathan Furst.

We also caught up with former 90210 Star Matt Lanter. “I’m so excited to see this movie, played a few versions of the video game when I was younger.” Matt is currently starring in a new CW show Starcrossed, which is completely shot on location in New Orleans. Starcrossed airs on Mondays 8/7 central time. 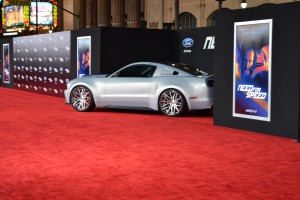 View our PHOTO GALLERY from the red carpet!