FIRE IN THE HAMPTONS INTERVIEW

Fire In The Hamptons is a five-piece band composed of lead singer Zack Arnett, drummer Aaron Bilye, guitarist Ian Dowd, synth/piano Emvy Venti, and the newest addition on keys/vocals Johnny Whitlock. Their unique sound that combines “dance-centric 80’s beats with gritty synthesizers and catchy vocal melodies” will make you want to get up and dance. 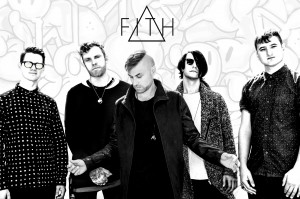 The  band funded the production of their new EP, Chosen Ones, with the help of a Kickstarter campaign. The EP is available now on iTunes. Music from the band’s first full-length debut album, F.I.T.H. has been creating major buzz about the band. The album has had music featured on MTV’s Awkward, Jersey Shore, Snooki & Jwoww, and most recently they opening for Dead Sara at The Viper Room.

PPLA: You have a very unique sound, what are some of your influences that inspire your music? Where do you gather your inspiration for the songs?

ZA: My influences run deep, it’s difficult to answer that question without a novel of babble. I’ll try and sum it up with this: I appreciate the authenticity of nature, the way the world takes breaths together without even knowing it. I’m magnetically drawn to artists that speak from their soul, and can translate that feeling into their craft.  Led Zepplin, Wu-Tang, Rage Against The Machine, Beastie Boys, Latyrix, DJ Shadow, Nas, MGMT, Beck, Phoenix, Nirvana, Otis Redding, Kings Of Leon, Yeah Yeah Yeah’s, The Police, M83, Tears For Fears, Frank Ocean, Kendrick Lamar, Eminem, The Ninja Tunes Camp, Freestyle Fellowship, Radiohead, Mad Season, things like this.

PPLA: How was your experience working with producer Carlos De La Garza?

ZA: We had some fun moments in the studio. We also butt heads. I learned a lot about myself as a producer, and the role in which a producer should encompass. He’s a talented guy no doubt, and despite the hurtles, we made something really good.

PPLA: Do you ever censored yourself? Have you ever written a song and then decided it was too harsh?

ZA:I like this question. The writing process is always different, but the goal is always the same, be honest. You have to sacrifice yourself for the listener. If you don’t commit then the song’s not worth listening to. The words have to mean something to you, they need to come from your soul, no matter what the consequence, that’s the risk we take as artists.

We put our blood and guts on display and hope it resonates with the masses. If not, you just look like an asshole. You gotta be able to say fuck it. Stand by your art. People will respect that as long as you have something interesting to say.

PPLA:  Are there any plans in the works for a tour to support the Chosen Ones EP?

ZA: Most definitely! We plan to hit the ground running in 2015.

PPLA: Fire In The Hamptons played a show with Dead Sara a few weeks ago, how was that experience?

ZA: We love Dead Sara! They’re good friends of ours. We share a passion to thrash and I find that to be a very rare and sacred bond between bands. We have different styles in our delivery, but the essence is the same. “Get nuts and bang them heads!”

PPLA: Your song “Humanimal” was featured on MTV’s Awkward, that’s an amazing accomplishment. How did that come to be? And how was the response from fans of the show?

ZA: MTV hit us up and asked us to use the track. We like having our songs placed in tv shows. The response is always positive.

PPLA: When you’re performing on stage, what’s going through your mind?

ZA: So many things happen on stage internally while performing. I compare it to being in a fight. It’s a blur, your survival instinct kicks in. When the dust settles you hope you’re not bloody and beat on the pavement. When you’re prepared, the chaos becomes a calm, like an out of body experience that you get to share with a room full of drunk maniacs. I love this.

PPLA:  What is next for Fire In The Hamptons?

ZA: We just want to be heard by the world. We have a message wrapped up in all this, and if you listen close you’ll feel it with us.

Be sure to catch Fire In The Hamptons live. They will be playing a free show at The Viper Room this Saturday, December 13th.

Watch Fire In The Hamptons lyrics video for “Chosen Ones.”

And don’t forget to catch the band at The Viper Room Saturday, December 13th for a FREE show!