Disney revealed a first look at their much anticipated film “The BFG.” The film, which is directed by Steven Spielberg and based on the best-selling book by Roald Dahl, hits theaters nationwide on July 1 and is currently debuting at Cannes Film Festival.

Much like Spielberg’s masterpiece E.T., The BFG focuses on the unlikely friendship between a little girl and an unusual creature played by Oscar winner Mark Rylance (Bridge of Spies). 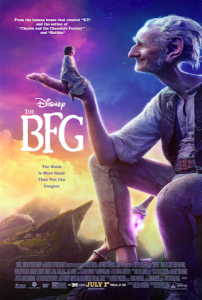 Ten-year-old Sophie is in for the adventure of a lifetime when she meets the Big Friendly Giant (Mark Rylance). Naturally scared at first, the young girl soon realizes that the 24-foot behemoth is actually quite gentle and charming. As their friendship grows, Sophie’s presence attracts the unwanted attention of Bloodbottler (Bill Hader), Fleshlumpeater (Jemaine Clement) and other giants. After traveling to London, Sophie and the BFG must convince Queen Victoria (Penelope Wilton) to help them get rid of all the bad giants once and for all.