FLIGHT: IN FOR SOME TURBULENCE 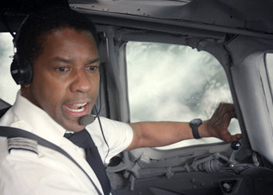 Flight follows the story of commercial pilot Whip Whitaker who miraculously lands a crashing jet airliner, but whose heroism is questioned when the truth of his substance abuse comes to light. However, even with maestro Robert Zemeckis at the helm of his first live action film in over a decade, the film struggles to accurately portray the true effects of drug addiction as it masquerades as a Hollywood blockbuster.

The film opens on Captain Whitaker awakening from a night of debauchery with one of his flight attendants, finishing the last swigs of beer and snorting a line of cocaine before leaving for his flight from Orlando to Atlanta. Full frontal nudity and uninhibited drug abuse make it clear that Zemeckis, who hasn’t directed an R-rated movie since 1980’s Used Cars, wants the audience to know they are in for a raw, uncensored film. The first act provides just that.

After takeoff, Whip steers the plane through torrential rain despite his less than acute mental state. He pours himself a stiff drink and it’s smooth sailing the rest of the flight. That is until a mechanical malfunction wakes him from his catnap as the plane violently drops and begins a terrifying, quick descent. Whip keeps his composure and performs a move so audacious it makes Captain Sully’s Hudson River landing look like pilot’s training. By inverting the plane 180 degrees, Whip is able to stop the plane’s descent, bringing it to a rough landing in a field near a church. The film’s crash scene is riveting and pulse pounding and reminiscent of the crash in Zemeckis’ Cast Away.

Whip quickly recovers from the crash. However, a toxicology report reveals the truth, and he retreats to his family farm to avoid media attention, where alcoholism continues taking over his life. Despite forming a relationship with a recovering addict he met in the hospital, as well as having the support of his union rep and an attorney who will stop at nothing to get the toxicology report thrown out, Whip continues his downward spiral until confronting his substance abuse issues, risking his career, his reputation, and his life.

In a press conference following the film, Zemeckis explained how he was attracted to the bold, audacious script, and especially drawn to the moral ambiguity of the characters. While he certainly does not endorse flying in a drug-induced state, he does want the audience to question whether even the best pilot would have been able to perform the same death-defying maneuvers that ultimately saved all but six of the 102 lives on board.

Denzel Washington also praised screenwriter John Gatins’ script, saying, “If it ain’t on the paper, it ain’t on the stage.” The strongest part of this film is certainly the powerful performances, not only from Washington, but also from Kelly Reilly, who audiences may recognize as Mary Watson from the Sherlock Holmes series. Her authentic performance as a recovering drug addict was riveting and should be on Oscar’s shortlist.

I think audiences will have trouble with this film because the traditional archetypes of good and evil are thrown out the window and moral ambiguity takes the reins. Screenwriter John Gatins,, who began work on Flight twelve years ago, compared the dilemma faced by Whip to that of a “famous cyclist” undergoing scrutiny today. Whip’s bout with alcoholism falls within the crossfire of an intense legal investigation, a morally devoid attorney, a greedy union rep, an estranged family, a deteriorated relationship, and relentless media attention. Yet Zemeckis continues to make light of his condition even at its worst. The nostalgic guitar riffs of a Rolling Stones song play as Whip’s friend and drug dealer Harling, played by a Lebowski-eque John Goodman, comes to “save the day” by bringing him even more drugs.

The problem isn’t that the filmmakers have allowed these enablers to flourish, but that they themselves romanticize their effects, putting aviator glasses over the red-eyed mornings that plague poor Whip’s life. In a movie fraught with villains, the filmmakers should have shown some responsibility to show the real effects of addiction without glorifying it. The film leaves you with a lacking Hallmark Hollywood ending without the honest understanding of substance abuse that we were promised from the start.