It’s hard to fathom, but the first time I saw the Foo Fighters was 17 years ago.  The time doesn’t surprise me, but the fact that they were the opening act on a split bill seems impossible given the band’s status in the Pantheon of rock gods.  They always put on an amazing show and last nights sold out Forum performance showed that there are little signs of them slowing down.

This was the first of two hometown shows for the Sonic Highways tour.  Since Grohl’s accident in Sweden this summer, however, it has more affectionately been dubbed the Broken Leg tour. Back in June, the Foo front man tumbled off stage while rocking just a little too hard and broke his right leg. 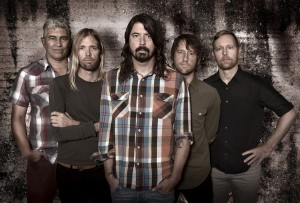 Rather than cancelling the tour for recovery, a throne was designed by Grohl and built by the road crew.  Imagine the Iron Throne from Game of Thrones built out of guitar necks that Grohl cooked up while “high as a kite” in the hospital.  Being stuck in his throne didn’t take away from the frontmans signature energy or humor, in fact it only serves to add to his ever growing legend.

The show itself can only be described as stellar, or amazing, or spectacular, or F$%#ING FACE MELTING.   From their guests – no big deal, just Jack Black, Haim, and a little known singer named STEVIE NICKS – to their refusal to do the song and dance of an encore (FF don’t leave the stage and pretend they aren’t coming back, they just play until they are kicked off), they once again proved why they are the best rock band in the world right now.  I might just have to finagle my way into the show again tonight, so if you’re there, I’ll be the ginger kid dancing way too hard for my age.