I had, with trepidation, waited about six years for what culminated in Season 3’s penultimate episode. Having read the series twice I thought I knew exactly what was coming, until they brutally slaughtered someone, who, in the books was not even at the now infamous internet-fracturing ‘Red Wedding’ massacre. The dust has barely settled, and Game of Thrones Season four begins.

This was producers/creators David Benioff and D.B. Weiss’s way of telling us know-it-all book readers lording our knowledge over those who merely watch the show that while the big picture remains true, some of the details have been altered and in most cases it helps to enhance on what author George R. R. Martin first envisioned. Kudos to Mr. Martin for allowing these alterations, so that aforementioned bookworms like me do not see a simple paint-by-numbers book to television adaptation. This keeps our demo interested and it streamlines a story with beaucoup characters and subplots so that those not familiar with the books can keep track and not become overwhelmed by the sheer mass of the mythos. Martin is not so pompous or arrogant to allow ego to creep in, in fact, he has improved on the maxim of writerly advice attributed to Faulkner which states, ‘kill all your darlings.’ Martin retorts ‘kill all your darlings and if you get a second chance kill a few more of your darlings.’
The opening episode reinforces this new edict with some fantastic scenes with Arya Stark and the Hound, the former of whom keeps the mantle of ‘Unlikeliest Awesome Pairings’ from her times with Tywin Lannister who, despite his machinations that made the red wedding happen, seems a jackass for not knowing he had a helluva bargaining chip pouring him wine. War, the apparent and actual deaths of everyone she has ever loved, watching someone being brought back to life, and her time with the likes of Tywin Lannister, Jaqen H’ghar and the Hound have made Arya uncomfortably comfortable with death, even killing.

While war has hardened Arya in both morality and resolve, Sansa, her decidedly demure sibling seems now a broken girl, as bleary-eyed as Tyrion, though for different reasons. Tyrion, now her husband, wishes to ease her pain, but the fact that he is a Lannister and that his family is directly responsible for all her pain Sansa remains mostly catatonic.

In other unholy union news the Queen-Regent Cersei Lannister no longer seems interested physically or otherwise in her one-handed twin Jaime. Jaime is also rejected by his father Tywin when he rebukes his orders to go to their homestead Casterly Rock. Jaime refuses to believe he is less of a swordsman despite the loss of his sword hand and continues to serve on the kingsguard. This season will be an interesting one for Jaime, who was already handicapped with his label as ‘kingslayer,’ ‘oathbreaker,’ and ‘man without honor.’ Now as a cripple he is more like his dwarf brother Tyrion (who has a tender spot in his heart for cripples, bastards, and broken things), and while they were always close, will soon need each other more than ever. How will he adapt while the walls on his world continue to close in? 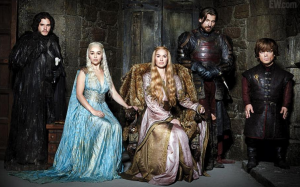 Speaking of the world closing in, the south is rising as Oberyn Martell, known as ‘The Red Viper,’ from Dorne heads up to King’s Landing to attend King Joffrey’s upcoming nuptials to Margaery Tyrell and apparently to avenge the death of his sister and his nephews by the Hound’s brother Gregor ‘The Mountain’ Clegane. Hey, where’s Joffrey’s nickname? Surely he has done enough to warrant being called something. I nominate ‘Douchebag Abomination.’ Just try calling him that a few hundred times in your head, maybe it’ll stick. Or just watch this.

Douchebag Abomination Joffrey believes that the war is over, that Stannis was broken and his is as untouchable as Reagan in 84’. But we have more weddings coming, and we should not forget that despite the one-sided results of the red wedding, there is always a reckoning, as Bran eluded to in his story about the man who killed guests under his roof, a great affront to the Gods.

Of course all these hints and foresight depends on the showrunners staying on course with the books which they have already proven to be about as likely as Tywin smiling or Hodor expanding his vocabulary, and these improvements to the story are not just strictly related to body count (but it certainly helps). There are other nuances, such as in the books there was a warning given just before the red wedding, something that would have been a dead giveaway to the betrayal in the television series, so they simply left it out and the result is some hysterical reaction shots to the horror on youtube.

This brave new world beyond the books means everyone watching wins, those familiar with story are kept on their toes thanks to Martin’s second draft, and those experiencing the story for the first time get an upgraded storyline with no wasted movements.