GARY CATONA AND KENNY BURRELL ARE ‘GIVING BACK FOR THE FUTURE’

Beverly Hills City Hall couldn’t have been a more perfect setting for the inaugural launch of the “Giving Back For The Future” charity event, the brainchild of  two musical masterminds, Gary Catona and Kenny Burrell.

Catona and Burrell have joined forces with the aspiration of bringing 100 children from 100 United countries to the United States in the grand scheme of a mega choir, and have them perform in concert at the United Nations Headquarters in New York on September 21st, 2015, on the International Day Of Peace.

The foundation held the charitable event in efforts to help raise funds to record a “Feed The World” music album, with those generated proceeds going to children’s charity and the United Nations. A portion of the proceeds from the event held on September 7th to help kick off these efforts, went to the Los Angeles Children’s Hospital. 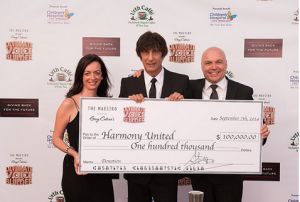 The black tie event brought out elite members of the community who dug deep into their pockets to give to such a worthy cause. Attendees were treated to Kenny Burrell directing some of his students while they serenaded the crowd in a very intimate setting.

Elegance was the word of the night as guests sipped champagne, enjoyed a delicious menu from Urth Café, and swayed along to melodic tunes.