Comedian Conan O’Brien opened the much-anticipated George Fest: A Night to Celebrate the Music of George Harrison at the historic Fonda Theater on Sunday night with a confession to the audience. The redheaded funnyman joked, “I was told this was a tribute to George Michael. I spent a week learning the song ‘Faith’.” 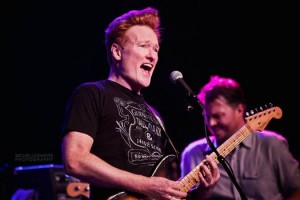 Conan then proceeded to bring down the house with a rocking rendition of Old Brown Shoe. O’Brien, an outspoken fan of Harrison’s, hosted a week-long tribute to the late Beatle on his TBS late night show where a bevy of the music industry’s heaviest hitters, including Paul Simon and Beck performed covers of Harrison’s greatest hits.

The concert was planned in conjunction with the release of a new box set entitled George Harrison: The Apple Years 1968—1975. Here the artist’s first six solo records were lovingly restored, remastered and complied along with a treasure trove of previously unreleased footage and recordings.

Dozens of artists came out on Sunday to support the cause and honor Harrison by playing their favorite tunes from his remarkable career with the Beatles, The Traveling Wilburys and as a solo artist.

Parody king “Weird Al” Yankovic showcased some serious rock-star moves while belting out “What is Life” and Brandon Flowers, the lead singer of The Killers, led the crowd in an engaging sing-along of “Got My Mind Set On You.”

Harrison traveled to India in 1966 to study the sitar under renowned classical Indian musician, Ravi Shankar. So, it was apropos that Shankar’s daughter, Grammy award-winning musician Norah Jones performed a smooth and sweet version of Harrison’s beloved track “Something” for the show.

As the evening came to a close and all of the evening’s musical guests lent their voices to finale song “All Things Must Pass,” a feeling of transience and the preciousness of life hung in the air. Although Harrison’s life was tragically cut short by lung cancer in 2001, his hauntingly beautiful songs live on. And so does his look-alike son, Dhani Harrison. Also, a musician, Dhani was instrumental in the production of his father’s box set and a key guest star of the show. He performed a number of evening’s songs as his mother Olivia Harrison proudly watched from the balcony.

Everyone loves George. His musical contemporaries, the musicians he inspired and his fans all revealed their love and admiration for this incredible artist on Sunday night. The star-studded concert proved to be once-in-a-lifetime experience for all one thousand Harrison fans in attendance, many of whom had lined up around the block for hours to experience this truly magical show. Seeing such celebrated artists perform Harrisons’ catalogue together can only be described as a treat for the soul and a treasured memory. 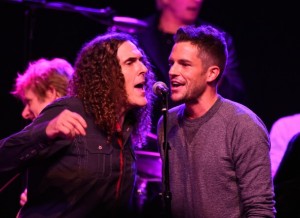