Every awards show has its ‘It Girl’ and this year was none other than the well-deserving Gina Rodriguez whose starring role in the debut season of Jane the Virgin made her a Golden Globe winner. She was also a red carpet winner in our book. Here’s how to get her look!

Gina was styled by Lauren Rodriguez and wore a stunning gown by Badgley Mischka with shoes by Jimmy Choo and jewelry by Chopard, with a Judith Leiber clutch. The feel of the dress was ‘Old Hollywood’ so we chatted with Joico hairstylist Paul Norton about how he chose to style her ombre locks.

“Gina and I felt it most suiting to keep consistent by channeling the looks of old Hollywood Glamour embodied by woman such as Rita Hayworth , Lana Turner, Ava Gardner, and Jane Mansfield,” said Norton, who also style Robin Wright for the big day.  “Given that the dress exposes the shoulders we knew that a romantic shinny classic waves were the way to go!”

Here is Paul’s step by step to get the look at home. 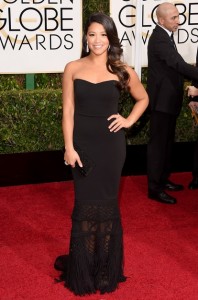 I began Gina’s look on damp hair that had been freshly washed with Joico *Color Balance Blue shampoo and Conditioner* to remove any brassiness from existing high lights we are growing out.

Knowing I intended on setting Gina’s hair to create a wave that was soft yet would hold all night I first added Joico *Joico Power Whip* from roots to ends and blew out the hair with a medium size boar bristle round brush until fully dry.

Once the hair was dry I took 3 large horizontal sections beginning at the bottom and sprayed Joico *IronClad Thermal Protectant Spray* gently throughout each section to protect the hair from the heat I was about to add to the hair.

I then took sections beginning in the back in the bottom of the head and with a 1 1/4 inch curling iron I curled 2 inch sections under and using larger agitator hair clips I secured each section in order to cool and create the perfect wave. As I made my way to the top section I gave her a deep side part on her right side and curled all of the hair under and away from the face and also secured those curls with large alligator hair pins.

Once the set was completed I generously sprayed several coats of Joico *Joi Mist Medium Styling and Finishing Spray* over the entire head in order for it to help set the wave while the hair cooled. Allowing the set to cool insures that they reform as actual curls. I then stepped away for about 15 minutes for proper cooling time.

Once I felt as though my set had perfectly cooled and reformed I began removing the clips and releasing my curls. From the bottom to the top. After every clip was removed I asked Gina to tilt her head back and rest her neck on the back of the chair allowing me the chance to vigorously run my fingers though her hair in a combing fashion breaking up each curl.

Next I put a dime size amount of Joico *Crème Wax Texture and Shine* in the palm of my hand and rubbed it around then applied it to Gina’s hair from root to tip, finger combing it all back away from the face and began to sort of place the hair exactly how I wanted it to lay paying close attention to her face shape in order to make sure each wave rested at the most flattering point. 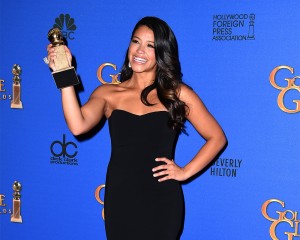 Once I began to like what I saw I then secured the waves with large metal hair pins in order for it to set in that form a little while longer allowing me time to brush back the right side with my baby Mason Pearson and secure it with several black bobby pins.

Lastly I sealed the entire head with Joico *Flip Turn Volumizing Finishing spray* in order to really insure the voluminous waves would hold all night and also a spray of Joico *K-PAK Color Therapy Dry Oil Spray for ample shine!

Once the dress was on we all collectively new that this old Hollywood look was certainly the way to go!