GETTING TO KNOW SACHIN SAHEL OF THE CW’s ‘THE 100’

The sci-fi hit TV show The 100 took over CW Wednesday nights last year and is back for a second season this March. Press Pass LA had a chat with one of the stars, self proclaimed sci-fi geek, Sachin Sahel, who gave us an exclusive look at what its like on set, what role his culture plays in his career and just how fulfilling it is to be in his dream role.

Sachin: Sure, so the shows premise takes place 97 years after a nuclear process killed everything on earth. Now, we live in a space station above earth that remaining nations joined together to create…one giant arc in space. There’s limited supplies, and because of that we use a philosophy that if you break the law you are immediately put to death, however, if you’re under 18 you’re put in a holding cell until you turn 18 and can be reevaluated and placed back with the rest of the population. Due to a critical error, we find out there’s only 3 months left of oxygen so what we do is send the 100 juvenile delinquents down to earth to see if it’s livable again…it’s crazy!

PPLA: Yikes, you just explained that with such conviction, I believed you, I felt like I was listening to the radio and this is actually about to happen! You seem so excited to be part of a show like this. Was this a project you had to research a lot to connect with?

SS: ::laughs:: Explaining it has become part of my DNA! I’m a huge sci-fi geek so to be cast in a show like this is just a dream come true. I mean, I play a doctor in space, for a sci-fi geek, its just the peak of evolution, that’s why it sounds so convincing when I say it because I’m so excited. Every time we get the script, its something you’ve never seen done, there’s no fakeness here, on the show there are things people would really do if they were in this situation, it’s what makes the show so real, not goofy. 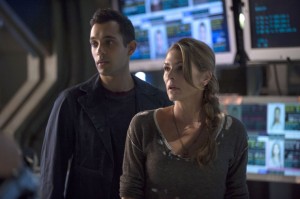 PPLA: What kind of feedback are you getting? Are sci-fi fans noticing the shows authenticity?

SS: Every week I read the reviews, and they’re always positive, we’ve been blessed with great ratings.

PPLA: What’s it like on set? You get to work with some big names, Isaiah Washington, Eliza Taylor…and how is this different than other projects you’ve worked on?

SS: Yeah, Eliza Taylor, the things she does on this show, she’s incredible and yet makes it look so effortless. The talent on the show is just great. Every single day, the best way to put it is: inspired. Most of the kids and younger talent on the show get sent down to the ground but I’m lucky enough to be on the arch. I get to watch these veterans who have been through it all and know what they’re doing and be amazing at their craft every time I’m there. How could I not learn and grow from this? They’re so nice, encouraging and so willing to offer advice, I feel absolutely blessed…it’s an honor to be a part of.

PPLA: So is it safe to assume this is your “dream role”? Or what would your dream role be?

SS: I have to say, this is pretty there! I never thought as a kid growing up loving science fiction that one day I’d be working on a ship floating in space. This is a role I’m really enjoying sinking into.

PPLA: Your heritage seems to play a big part in your life, what impact does it have on your career, the roles you chose or do you find that certain roles choose you because of it?

SS: Yeah, I’m a little ambiguous but I’m Indian and like my mom always says ‘make sure you tell them you’re Indian, tell them!’ and I do, I’m very proud of where I come from. I don’t think what we look like should define anything about us, and it’s not about being colorblind it’s about looking at each other as people. Loving people’s differences. I’d love to do an Indian role I’m excited about and if it’s right in my career.

PPLA: OK, fun questions, if you’re alive in 97 years what do you see yourself doing?

SS: “Beside trying to remember my name, probably one of two things…watching Back to the Future (my favorite) or standing on a basketball court trying to get a 3 like a I did back in the day. 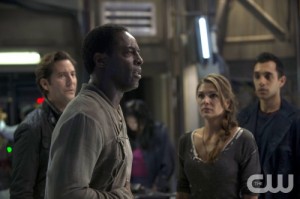 PPLA: If you were a cartoon, what would you be?

SS: I’d love to be a cartoon one of these days…oh, that’s a great question…I’d want to be a griffon, it’s a half lion, half eagle, it’s mythological but I just think they’re the dopest creatures…or a dolphin, because they’re just sweet.

Chatting with Sachin was such a pleasure; he had me laughing the whole time! Keep up with him on twitter @Mr_Sacho and of course check him out on the new season of the CW’s The 100.