GETTING TO KNOW AURA: A STAR ON THE RISE

Every decade or so there comes a musician that channels their energy in such a way it becomes instantly popular and influential. Maura Murphy, also known as Aura, is that kind of artist. Filled with raw emotion her songs were created to be an anthem to the current generation of listeners. 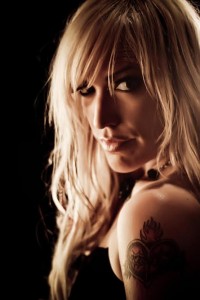 Already into her third album Murphy, who recently relocated to Nashville from Los Angeles, won Best Female Rock Vocalist at the L.A. Music Awards in 2006 and has since gone on to win a plethora of accolades from magazines across the country.

Press Pass LA sat down with the rising star to discuss her passions, inspirations and where she sees herself in the future.

PPLA: What got you into music?

MM: I have been into music as long as I can remember. I performed in dozens of musical theater town and school plays from childhood until college. I had imagined myself being on Broadway, as I grew up 30 minutes northwest of New York City, but I went to my first rock concert at Madison Square Garden as a teenager and spent every dollar I had ever saved in buying an electric Fender Stratocaster and Fender amp.

PPLA: How did you discover your genre of choice?

MM: I was always into rock and electronica music. My last cd, “Burning Hearts & Bleeding Stars” was
both genres. I wrote a few songs on that cd that have a lot of spiritual meaning behind them like “Chosen” and “One Step Away.” When I recently moved from Los Angeles to Nashville my new manager, Taylor Morrison, thought that my songs would crossover into the Christian Rock market. We just shot a music video in Nashville for my song “Chosen” where I’m an angel, as I am on the cover of my new cd. I was raised Catholic and hold those values in my heart and they do come out in my lyrics.

PPLA: Who do you consider to be your role models? why?

MM: I first listened to a lot of music from the 1960’s, The Doors, Pink Floyd, Janis Joplin,
Johnny Cash. Green Day and Radiohead had very strong influence on my teenage years. There was so many people than influenced me, not really just one.

PPLA: What song changed your life?

MM: Such a hard question to answer, so I’m going to have to list all of the ones I can think of: “You Oughta Know” by Alanis Morissette “Bittersweet Symphony” by The Verve, “With Or Without You” by U2, “Good Riddance (Time of Your Life” but Green Day, “Get It While You Can” by Janis Joplin,
“Comfortably Numb” by Pink Floyd, “White Rabbit” by Jefferson Airplane, “Make Damn Sure” by Taking Back Sunday, “Rebellion (Lies)” by Arcade Fire, “Medication” by OURS, “Okay I Believe You But My Tommy Gun Don’t” by Brand New, “God’s Gonna Cut You Down” by Johnny Cash,”I Shall Believe” Sheryl Crow, “The End” by The Doors, “Down With Disease” by Phish, “No Sleep til Brooklyn by The Beastie Boys, “Only In Dreams” by Weezer, “Empire State of Mind” by JayZ (Feat. Alicia Keys), “Mad World” by Gary Jules,”Creep” by Radiohead (I do a very haunting cover of this song still to this day), “Remember When” by Alan Jackson, “Country Roads” by John Denver, “The Missing Frame” by AFI and my newest favorite “Oceans” by Hillsong United. I’m sure I’m missing some!
PPLA: Tell me about your new album, what’s the story behind it?

MM: This album will probably be my favorite. My first album was more of an ep recording while attending Berklee College of Music in Boston called “Running Yourself Against Nothing.” My second album, “Between Reality and a Dream” is very California/Pop-Punk Rock. My last album, “Burning Hearts and Bleeding Stars” was very electronic rock with elements of sound effects I had never used before in production. So this fourth studio album is going back to the roots. It’s going to have a southern rock, bluesy feel with real, live instruments, including fiddle and mandolins on top of the staple guitar, bass and drums and possibly some electronic beats within. A very honest, tell-all, grass roots album with a modern flair!

PPLA: What’s your favorite track off the new album? why?

MM: “For the Rest of My Life” which I co-wrote with one of my best friends, and longest
friends, Shiloh Fernandez (Red Riding Hood, Evil Dead), which tells the story of our friendship that lasted all those crazy years in Los Angeles. He is a very successful actor and on his way to becoming more so.

I was his first roommate in Los Angeles and we have followed each other’s lives and careers through the years. He came up and sang this song with me at our last show at The Roxy in Hollywood. Hopefully he is coming out to Nashville to shoot a music video for the song once it’s finished!

PPLA: What’s your next step? where do you see your career going in the next five years?

MM: I’ve been in Nashville for about 5 weeks now and my plan is to form a touring band to take this new album on the road with by early July. I want to tour as much as possible this year. Being in Tennessee, we are surrounded by so many states, which makes touring a lot easier than living in Los Angeles, where many cities are far away. I am hoping to sign a record deal and have a hit song as well! Lots of great things are in negotiations right now! Dream Big or don’t dream at all!