Whether young or old chances are you have had some exposure to Edward Asner. For many he was Lou Grant, the cranky boss in the comedy The Mary Tyler Moore Show, or Captain Thomas Davies in the influential mini-series Roots. Most modern audiences know him as the voice of Carl in Pixar’s beloved Up.

His work on everything from sitcoms to movies and cartoons has touched the lives of millions. Press Pass LA had the chance to sit down with Ed Asner, a true icon of the entertainment industry. Asner is widely considered to be a television legend, having received seven Emmys and 20 nominations over a career that spans nearly 50-years.

PPLA: You’ve had a long career, has there been any one role you consider to be a defining moment?

Asner: Well I spent 12 years as Lou Grant, that was pretty significant and a lot of fun. (laughing)

PPLA: Speaking as a journalist I know your role inspired a lot of people in our industry.

Asner: (laughing) don’t blame me for anyone that decided to get into journalism because of me. I think one of the most defining roles for me was as Axel Jordache in the mini-series Rich Man, Poor Man back in the 70s. It was a big departure for me and it gave people the chance to see me in a new light.

PPLA: You’re doing the one man show FDR, how did you get involved in that?

Asner: I have been doing the theater on cruises for a while there was one night where we didn’t have anything planned. Someone showed me FDR and I saw it was very well-written. It seemed like a great fit so we did it. We’ve been touring the country now for four years.

PPLA: Pixar has been doing a lot of sequels lately, has there ever been talk of an Up 2? 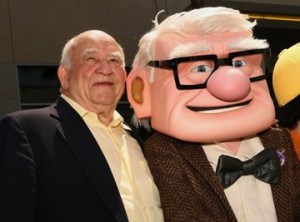 Asner: No, not a bit. I don’t think they plan on doing it. It was a fantastic experience to work on, and I’m grateful for the chance to have played the character.

PPLA: As an actor you’ve done pretty much everything from comedy and drama to animation. Do you have a favorite genre that you like to work in?

Asner: No, I like them all. I can get just as excited about doing a film as I can doing a voiceover. I’m able to transport myself into the character. It doesn’t matter if I walk the walk, if I talk the talk. I really care about every character that I do.