GETTING TO KNOW THE CAST OF NBC’S NEW COMEDIES

Press Pass LA was invited to Universal Studios this week, to meet the cast of their two new comedies Telenovela (premiering on December 7 at 10 p.m.) and Superstore (premiering on November 20 at 10 p.m.) both on NBC. The lovely afternoon included Q&A panels with both shows, as well as a mingle and meet and greet with the cast and producers.

The day began with the Telenovela panel, starring Eva Longoria who is also a producer on the show. The show is a comedy about Ana Sofia (Longoria), the star of a hit telenovela, and how the hilarious and over the top actors and crew all work together in attempt to steal the spotlight.

Telenovela marks Longoria’s first TV role since Desperate Housewives and many want to know, why now? What is it about this project that was so special to make Longoria return to the small screen? Longoria clued us in as to what she has been doing the past few years and why Telenovela is what finally drove her to go back to her roots. 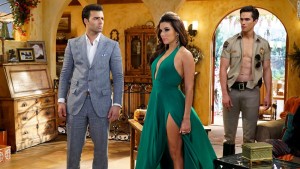 “I left Housewives three or four years ago, focused on my charity work and was traveling the world. I then started directing and producing Devious Maids and other projects, and I knew I wanted to return to television, it is my favorite medium of content, television is at it’s best right now. I knew I would go back and do a comedy because I had such a great time on Housewives,” she notes.

“However, Housewives was one of the best shows in the past decade and I really hit the lottery, and I thought ‘I’m not gonna hit the lottery again, and if I ever go back to TV it has to be something important.” Longoria then told the audience that Telenovela was actually supposed to be a one hour drama and was in development for a little while, that is until she met with Chrissy Pietrosh and Jessica Goldstein, who ended up writing the pilot and are now producers on the show. Longoria was not planning on being in the show, however after she read the script she looked and Pietrosh and Goldstein and said, “I am going to have to be in this, aren’t I?” 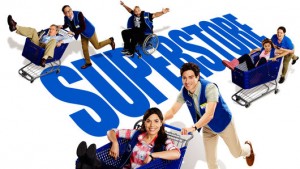 After a lovely mingle with the cast, we got to sit down for another Q&A with the cast and creator of Superstore starring America Ferrera (Ugly Betty) and Ben Feldman (Drop Dead Diva, Mad Men). Superstore is a hilarious workplace comedy (produced by Justin Spitzer of The Office) about a unique and lovable group of employees at a superstore. In addition to Ferrera and Feldman, the cast also includes Mark McKinney, Lauren Ash, Colton Dunn, Nichole Bloom and Nico Santos.

Similar to Longoria, Ferrera has not made her big TV return until now. Ferrera explains what was so special about this project, and why she chose now to return to the small screen. “I wasn’t necessarily in the market for something like this, but they sent me the script, and it was great writing, funny, smart, relevant. Also, when I saw how Justin was casting the show it was a huge draw for me. None of the characters were written in any race, except for Nico’s character who was written Mexican and was cast Filipino. Now is a great time to give a voice to the American working class.”